The Bold and the Beautiful Spoilers: Sally Accused Of Being Hope’s Stalker, Desperate To Prove Innocence – Who’s Setting Her Up? 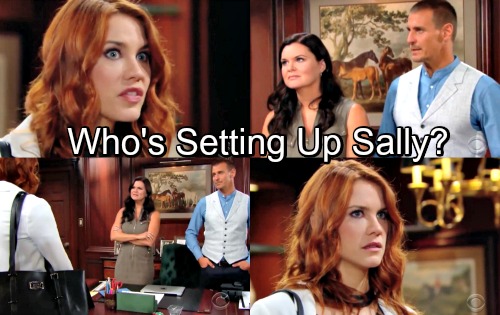 The Bold and the Beautiful spoilers tease that the Sally (Courtney Hope) will be on the hot seat as the search for Hope’s (Annika Noelle) stalker revs up. Someone has been sending threatening messages to Hope on the new Hope For The Future website, and it’s getting everyone at Forrester determined to find out who’s behind the threat.

Thorne (Ingo Rademacher) and Katie (Heather Tom) will get Ken the IT specialist (Danny Woodburn) on the case to track down where the threatening messages are coming from. And it looks like they’ll have some luck in finding out who may be sending the messages. B&B spoilers say that Thorne and Katie will soon feel confident that Sally is the person behind the threats.

Will Ken find that the messages originated from Sally’s IP address? Or maybe they’ll just find that the threat came from within Forrester and they’ll suspect Sally since Sally and Hope don’t get along. Hope has essentially shut Sally out from ever showing her designs at Forrester, so it stands to reason (or at least it will for Thorne and Katie) that Sally may be retaliating.

Whatever Ken finds, Sally will vehemently deny that she’s the guilty party. She’ll probably argue that she’s a hothead, but that she says what she has to say outright and is not the type of person to send veiled threats. Sally really wants this gig at Forrester to work out, and she’ll probably insist that she’d never do anything to jeopardize this opportunity.

But Sally’s denials will likely fall on deaf ears. After all, Sally is not particularly well-liked or trusted at Forrester. B&B spoilers say that Sally will not only defend herself against the accusation, but she’ll take matters into her own hands and work toward finding the guilty party herself. She may think that the best way to clear her name is to do her own sleuth work.

What will Sally do to clear her name? And will she find the real culprit behind the threats? Stay tuned to the CBS soap and don’t forget to check CDL often for the latest Bold and the Beautiful spoilers, updates, and news.