The Bold and the Beautiful Spoilers: Sally Helps Liam Begin To Cool Off – Will He Forgive Steffy? 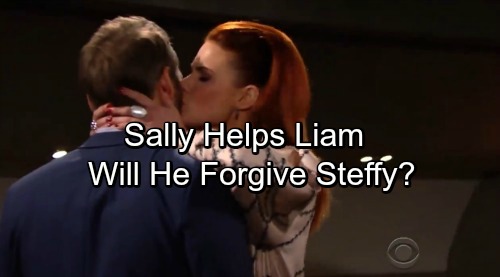 It’s like totally understandable (written in old-school Californian surfer tone) that Liam needed time to get his head together. The two reckless personalities he’s connected to, yes Steffy and Bill, wrecked his view of reality.

Considering that Liam already had a fragile grip on the world, it stood to reason that he would be completely devastated by Steffy’s incredible admission. Yes, she slept with your dad, Liam. Oh wow!

It doesn’t take an advanced degree in psychology to conclude that Liam’s projected weakness pushed Steffy toward Bill’s perceived strength. All knee-jerk emotionalists (yes, every single one of them) absolutely, positively and without question believe the reverse is true. The son is strong and the father is weak, according to that philosophy of life.

Then there’s the separate Sally (Courtney Hope) question to ponder. Is this friend, who wants more from Liam, a threat to Steffy?

Arguments regarding each woman’s appeal to the junior Spencer, as Bill seemingly isn’t interested in bedding Miss Spectra, aren’t relevant. Suffice it to say, both people bring great things to Liam’s relationship table. But Steffy is carrying his child, which made him realize that it was time to head home. Interestingly, Sally drove that point home.

A soap paternity result can always be adjusted. So, yes Bill may actually be the father of Steffy’s child. He could have orchestrated the current findings, or be just as surprised by a future shock in this regard.

Whatever transpires within the months leading up to Leffy’s child’s birthday, both people are this boy’s or girl’s parents. It could well be that they somehow stay together, or split. But both parties seem determined to be a full part of their child’s life.

B&B fans can easily project Liam and Sally and Steffy and Bill. Those couple’s personality types do seem to match. Whether the pairings happen remains an open question in this section of fictional Los Angeles.

But let there be no doubt. Liam will never forget what happened. Steffy had latent feelings for another man. Bill isn’t the only one to blame. And Sally offers friendship as soon as she learns what really happened. Again, the redhead could be the spark that lights more than one flame. CDL is a leading source for everything linked to The Bold and the Beautiful. Check back regularly for B&B spoilers and news!