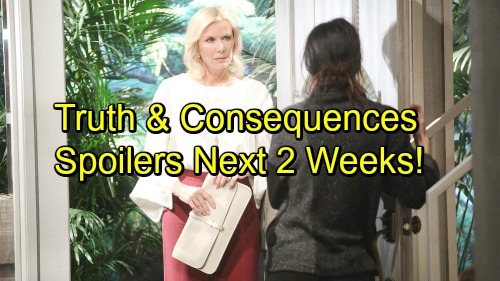 The Bold and the Beautiful (B&B) spoilers for the next two weeks tease that some stunning moments are coming up. The week of January 15-19 will bring some bombshells. First, Liam (Scott Clifton) will crush Steffy (Jacqueline MacInnes Wood) with annulment papers. He’ll add to the devastation when he slowly removes his wedding band.

Steffy will deliver another tearful plea, but it’ll be no use. Liam will insist that he can’t take Steffy back after what she did to him. Meanwhile, Thorne (Ingo Rademacher) and Rick (Jacob Young) will meet with Eric (John McCook). They’ll present what they believe is a brilliant plan to oust Ridge (Thorsten Kaye).

Of course, Eric will resist the idea. He won’t be ready to shove Ridge aside just yet, but Rick and Thorne will keep working on it. Later, Rick will join Ridge and Ivy (Ashleigh Brewer) as they ponder a mystery. They’ll believe Bill (Don Diamont) has a new mystery woman on his mind, so they’ll try to figure out who it might be. 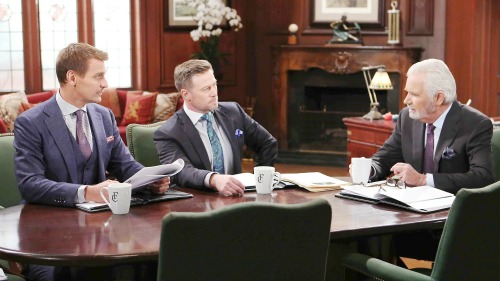 Brooke (Katherine Kelly Lang) may learn exactly who it is soon enough. When she stops by Steffy’s place, she’ll realize the poor girl’s a mess. The Bold and the Beautiful spoilers say Brooke will urge Steffy to explain what’s bothering her. Will Steffy spill the whole ugly truth?

Afterward, Steffy will worry about telling Ridge. Her dad needs to hear about the Bill drama before the news spreads. Steffy will eventually just have to bite the bullet. B&B fans can expect Ridge to unleash his wrath once he’s in the loop.

The week of January 22-26 will deliver a fierce confrontation. The Bold and the Beautiful spoilers say Ridge will fume over Bill’s actions. Steffy will contend that she was a willing participant, but Ridge will place the blame on Bill. He’ll march over to see his rival and the rest of the story won’t be pretty!

Ridge will unload his complaints and accuse Bill of preying on Steffy. He’ll think it was ridiculous for Bill to show up when Steffy was so vulnerable. Ridge’s outburst will enrage Bill, so the tension will really rev up. No one would be surprised if this turned into an all-out brawl.

Elsewhere, Liam will let Hope (Annika Noelle) distract him. He’ll ask her to talk about her time away so he doesn’t have to think about his own problems. Hope won’t push Liam too hard. He’ll undoubtedly open up when he’s ready.