BY Heather Hughes on September 25, 2018 | Comments: one comment
Related : Soap Opera, Spoiler, Television, The Bold and the Beautiful 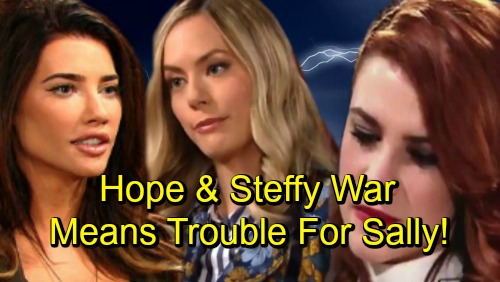 The Bold and the Beautiful (B&B) spoilers tease that Sally (Courtney Hope) will soon have something to celebrate. On next week’s new B&B episodes, October 1-5, Sally will happily show off some lingerie designs to Wyatt (Darin Brooks). She’ll be thrilled about debuting them at a new photoshoot, so she’ll want Wyatt to join in her excitement.

Fortunately, Wyatt will be just as enthusiastic about Sally’s talent and determination. He’ll throw plenty of support behind his girlfriend as she gears up for this significant milestone. Sally will just hope that all goes well at this event. She took a bad situation and turned it into a good one when she joined the intimates line.

Sally didn’t want to hang around at Hope for the Future, where she wasn’t appreciated and could’ve been cut. Unlike Hope (Annika Noelle), Steffy (Jacqueline MacInnes Wood) wants to take advantage of what Sally has to offer. She’ll have high hopes for Sally’s designs, so things will really be looking up.

Later, the photoshoot will get underway. Sally’s designs will be a hit as expected, so she can at least be proud of that. However, that doesn’t mean Steffy and Sally can relax. Now’s not the time to get cocky and assume everything will go smoothly. This is B&B we’re talking about! There’s bound to be some drama before you know it.

The Bold and the Beautiful spoilers say conflict will come from a couple different sources. For starters, Emma (Nia Sioux) will battle jealousy over Zoe (Kiara Barnes) and Xander’s (Adain Bradley) connection. Once Emma sees them working together, it’ll bring out a nasty side of her.

As Emma and Zoe’s war revs up, it could put the line’s future in jeopardy. Emma seems just a step or two away from sabotage! Nevertheless, Hope and Steffy’s hostility could be just as concerning. Don’t think that Hope’s just going to sit back and cheer her rival on. There’ll definitely be more tension, which opens the door to heated arguments and disruptions.

Bottom line, Steffy and Sally’s success isn’t set in stone. They’d better dial down the celebration and stay on guard instead! We’ll give you updates as other Bold and the Beautiful news comes in. Stick with B&B and don’t forget to check CDL often for the latest Bold and the Beautiful spoilers, updates, and news.