The Bold and the Beautiful Spoilers: Shocking Promo Week of September 17 – Bill’s Custody Fight Gets Fierce, Ridge Fuels the Feud

BY Heather Hughes on September 15, 2018 | Comments: one comment
Related : Soap Opera, Spoiler, Television, The Bold and the Beautiful 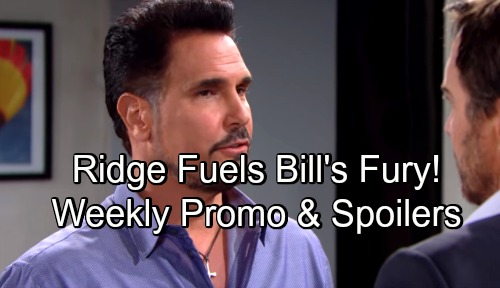 The Bold and the Beautiful (B&B) spoilers for the week of September 17-21 tease that we’ll see some crucial declarations. First, Thorne (Ingo Rademacher) will do his best to ease Katie’s (Heather Tom) mind. She’ll feel like he’s only proposing because of this nasty custody battle. Katie will get emotional as she tells Thorne he doesn’t have to do this.

Thorne clearly knows the benefits of this engagement. The judge will view them as a united, stable option if they plan to get married. It’s a smart move since they’re playing to win. However, Thorne has also fallen fast and hard. When he thinks about the rest of his life, he sees Katie and Will (Finnegan George) in it. Thorne will insist that his future is with them.

Ridge (Thorsten Kaye) will believe they’ve got the upper hand as well, but he certainly won’t be upset about it. He’ll hope Bill gets exactly what he deserves. For Ridge, this is personal. He can deny it all he wants, but he obviously thinks Bill should pay for everything he’s done. That includes all the chaos Bill brought to Steffy (Jacqueline MacInnes Wood) and her wrecked family.

The Bold and the Beautiful spoilers state that Ridge will be confident, but not confident enough. He’ll feel the need to rattle Bill’s cage a bit. After Ridge gets in his enemy’s face, “Dollar Bill” will fire back. He’ll insist that he loves Will and intends to fight for him. Bill will shout that Thorne and Katie won’t win, but Ridge will suggest that he might be surprised.

Later, Ridge will contact the judge who’s set to preside in family court. The Bold and the Beautiful spoilers say Ridge will meet with Judge McMullen (Joe Lando), so this guy may be an old friend. If Ridge makes his case and seeks a favor, it could spoil Bill’s shot at keeping his kid.