The Bold and the Beautiful Spoilers: Steffy Confesses Feelings To Liam – Wants Steam Back Despite Hope’s Pregnancy

BY hellodrdavis on November 17, 2018 | Comments: one comment
Related : Soap Opera, Spoiler, Television, The Bold and the Beautiful 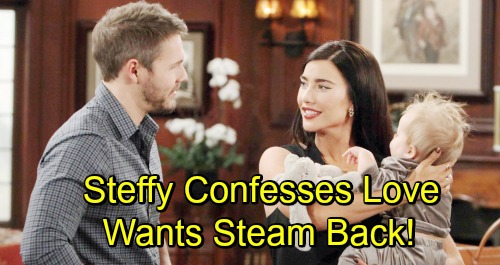 The Bold and the Beautiful spoilers tease that Steffy (Jacqueline MacInnes Wood) will soon make a bold confession. The holidays are coming up, and it will be Steffy’s first holiday season with Kelly (Chloe Teperman). Steffy will be feeling sentimental, and she won’t be able to help but think about what might have been.

Had events unfolded differently, this would be Liam (Scott Clifton) and Steffy’s first Thanksgiving together with Kelly. It would be a magical time as they celebrated as new parents and watched Kelly do all her firsts – first Thanksgiving dinner, first Christmas Eve, First Santa gifts.

But because of Bill’s (Don Diamont) presence in their lives and his manipulation of Steffy, Liam, and Hope (Annika Noelle), the holiday season will be quite different than Steffy planned. Instead, Hope is now married to Liam with a baby of their own on the way, and Steffy and Liam are merely co-parents to Kelly.

Sure, Steffy has made a new life for herself and is focusing on herself, her work, and Kelly (and is doing a great job of it). But she can’t help but think of what this holiday season could have been for herself, Liam, and Kelly. She’s only human, and it will sting.

Could Steffy still want Liam after all this time? It certainly seems as though she’ll be pining for him this holiday season. According to B&B spoilers, Steffy will have a chat with Liam, during which she will confess her “what if” feelings and admit that Thanksgiving will be difficult for her because she thought they’d be celebrating it together with Kelly.

Steffy won’t intend to make Liam feel bad, but it’s interesting that she’ll decide to voice her feelings to him rather than keep quiet. Deep down, it seems that she wants him to know that she still has feelings for him and that they were the ones who were really meant to be together.

Interestingly, Hope will end up overhearing Steffy and Liam’s conversation, and she’ll take pity on Steffy rather than be upset by Steffy’s confession. But is that a wise thing to do, from Hope’s perspective? It could be that Steffy just sent a clear warning signal that she really wants Liam back!

Do you think Steffy wants Liam back deep down? Stay tuned to the CBS soap and don’t forget to check CDL often for the latest Bold and the Beautiful spoilers, updates, and news.