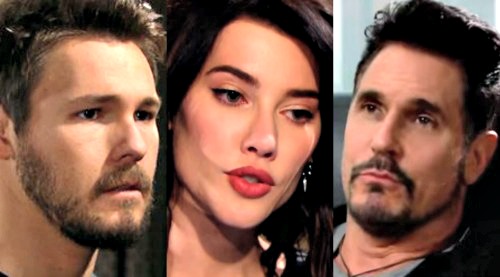 The Bold and the Beautiful spoilers documented all things Steam, Lope, and Still. Now that Steffy (Jacqueline MacInnes Wood) made her double decision, Steam and Still are over. That means Lope is the surviving couple and different dramas lie ahead.

There’s no doubt that the quadrilateral (Steffy, Bill, Don Diamont, Liam, Scott, Clifton, and Hope, Annika Noelle) that existed provoked plenty of intrigue. This soapy four-sided shape was unpredictable. But it’s time to move forward now that B&B has shown viewers who ended up with who.

Steffy reversed herself in a manner that pleased many Los Angeles residents and their viewers. She emotionally knee-jerked into a contractual arrangement with Bill after Liam disappointed again. Her ploy was clever, as Dollar Bill was asked to relinquish all shares of Forrester Creations’ stock in return for his deeply desired Still nuptials.

Bill instinctively rejected Steffy’s request, but immediately reversed himself after she turned to leave. B&B built that Hope (pun intended) well, as viewers naturally believed the marriage was possible, while also knowing that its delayed realization made another outcome plausible.

This scribe did not see Steffy walking away from the father and the son. Yet her doing so feels like the right creative choice because it opens many new plot paths, rather than extending existing ones.

Hope and Liam were engaged by Steffy in a quirky, yet fitting, kiss-off of what had been a tortured triangle. Hope is having Liam’s baby and wants to marry him. Clifton’s character has evidenced wisps of strength. Whether this bit of manliness persists in La La Land. And, yes, that’s a combined movie reference, kick at Hollywood culture, and nod to the proceedings in the fictional version of this Los Angeles city.

Hopefully, Liam and Hope get married and stay linked. Their personalities pair nicely and the forthcoming boy, or girl they’ll have deserves traditional stability, which has benefited children across the globe for ages.

Steffy has freed herself from Liam’s persistent indecision. Her choice is bold and she’ll surely project beauty, as Wood’s character returns to modeling gigs within Forrester’s world.

As for Bill, well, who knows. He’s still the same curmudgeon. While he appeared accepting of Steffy’s decision to not marry him and did gift her the Forrester shares, this particular character thrives on chaos. So Wyatt (Darin Brooks) and Justin (Aaron Spears) better prepare for whatever the rest of summer and the approaching fall brings to Spencer Publications.