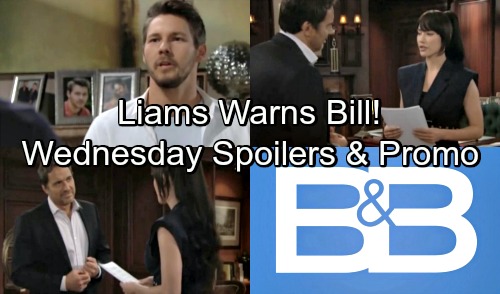 The Bold and the Beautiful (B&B) spoilers for Wednesday, August 8, tease that Liam (Scott Clifton) will lash out at his manipulative father. Bill (Don Diamont) turned his son’s life upside town time and time again, so Liam has every right to be angry. He’ll feel the need to blast Bill over the past and warn him about the future.

Now that Steffy’s (Jacqueline MacInnes Wood) made her choice, Liam has decided to move forward with Hope (Annika Noelle). However, that doesn’t mean he’s fine with Bill chasing after Steffy. Liam will want to set Bill straight about what’s next. He’ll admit his engagement to Hope is back on, which should prompt Bill’s words of congratulations.

Naturally, Liam will shut down any type of kindness. He’ll argue that Bill doesn’t get to be happy about taking a wrecking ball to his life. The Bold and the Beautiful spoilers say Bill will offer an apology, but Liam may not buy that it’s genuine. He’ll just want to deliver a threat and hopefully keep Bill away from Steffy.

Liam will declare that Steffy’s off-limits and urge Bill to find someone his own age. He’ll think it’s ridiculous for Grandpa Bill to keep up his pursuit. Fortunately, Bill has thrown in the towel. He’ll inform Liam that he has no intention of fighting for Steffy. She made her lack of love clear, so Bill’s doing what’s right and letting her go.

B&B spoilers say Bill will be sorry about all the drama, but he’ll want Liam to know something important. He’ll deliver a speech about his mistakes and warn Liam not to make the same ones. Bill may think Liam needs to focus on his relationship with Hope and put Steffy behind him. He might argue that trying to force something only brings great loss.

By going after Steffy, Bill destroyed his relationship with Liam and still didn’t get the girl. He may push Liam to just enjoy the ease of being with Hope and stay away from risky decisions. Elsewhere, Ridge (Thorsten Kaye) will let Steffy know that he’s proud of her. He’ll be pleased that she’s setting great goals and not letting men drag her down.

Steffy will insist that she’s all about Kelly these days. She just wants to be a good role model for her daughter and give her the security she deserves. The Bold and the Beautiful spoilers say Steffy will concentrate on her independence for a while, but you never know when Cupid’s arrow will strike!

Perhaps a new love story isn’t too far off. We’ll give you updates as other B&B news comes in. Stick with the CBS soap and don’t forget to check CDL often for the latest Bold and the Beautiful spoilers, updates, and news.