The Bold and the Beautiful Spoilers: Steffy Insists on Attending Lope Wedding – Struggles Through Liam and Hope’s Heartfelt Vows 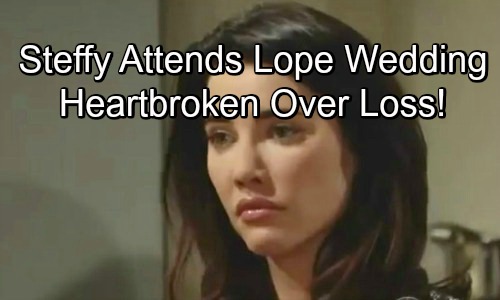 The Bold and the Beautiful (B&B) spoilers tease that Liam (Scott Clifton) will accept what he can’t change and put Steffy (Jacqueline MacInnes Wood) behind him. If he’d been able to resist that passionate changing room encounter, this whole situation might’ve turned out differently. Liam hadn’t made a firm decision on which woman he wanted to be with, so he could’ve ended up with Steffy.

However, Liam couldn’t resist temptation and that told Steffy all she needed to know. Even if Liam had ultimately picked her, Steffy didn’t want to live her life in constant fear.

The Bold and the Beautiful buzz claims Liam’s lingering love for Hope (Annika Noelle) would’ve posed a threat to their marriage, so she chose to take herself out of the equation. Steffy has made peace with “Lope” and soon, Liam will as well.

The Bold and the Beautiful spoilers say wedding plans will get underway next week. Since Steffy’s no longer an option and Hope truly wants him, Liam will think the path is clear. He’s the kind of guy who likes to be married, so he might as well just go for it.

Nevertheless, these B&B nuptials are sure to be awkward. Liam and Hope’s loved ones already gathered to watch them tie the knot. Of course, everything fell apart thanks to Wyatt’s (Darin Brooks) last-minute confession.

After the truth about Bill’s (Don Diamont) manipulation came out, Liam went back to Steffy and insisted he wanted to marry her. B&B fans know that Hope’s pregnancy put that on hold and now he’s back with his second “baby mama.”

In other words, Liam’s love life is a mess! The guests may secretly take bets on how long this marriage will last. With Liam’s track record, Hope will be lucky to get a few months of happiness.

We should also note that Steffy will insist on attending the wedding according to The Bold and the Beautiful spoilers. Perhaps she’ll just plan to show that she’s strong and supports this union. How will Steffy feel during Liam and Hope’s heartfelt vows?

It should be tough to listen to all those promises. Steffy will have to watch “Lope” kick off the future that she used to want. Just because she doesn’t want it now doesn’t mean this will be easy.

The Bold and the Beautiful spoilers say Steffy will have a lot to cope with, but she’ll inevitably bounce back. She’s ready to head down a new road, which could involve finding someone else to love and cherish. We’ll give you updates as other B&B news comes in. Stay tuned to the CBS soap and don’t forget to check CDL often for the latest Bold and the Beautiful spoilers, updates, and news.