The Bold and the Beautiful Spoilers: Steffy Needs a Strategy Shift – Letting Go Will Bring Liam Crawling Back

BY Heather Hughes on February 6, 2018 | Comments: one comment
Related : Soap Opera, Spoiler, Television, The Bold and the Beautiful 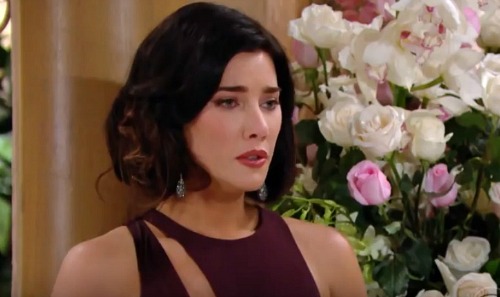 The Bold and the Beautiful (B&B) spoilers tease that Steffy (Jacqueline MacInnes Wood) will continue to whine and sulk. She’s desperate to earn Liam’s (Scott Clifton) forgiveness, but she’s going about it all wrong. Begging and moping aren’t the way to get Liam back. There’s another tactic that has a much better chance of working.

B&B fans know how Liam rolls. He only wants someone when he has to fight for her. All of Steffy’s pleas are falling on deaf ears. Liam’s not as angry as he was, but he’s standing his ground on the forgiveness issue. He just doesn’t see how they can get past this.

Will Liam eventually wear Steffy down? Will she decide to throw in the towel and focus on the baby? Steffy’s wounds are probably too fresh to start another relationship right now. A woman pregnant by someone else usually isn’t a huge draw anyway.

Bill’s (Don Diamont) the only guy knocking on Steffy’s door and she’s assured him that they’re through. If Steffy sticks to her guns on that, she may concentrate on preparing for this child. Steffy could give Liam the space he needs to heal. She might move on with her life and close the door on their future together.

Of course, that may be the perfect strategy for winning Liam over. He’s a man who loves the chase. If Steffy signs the annulment papers and sets Liam free, that could actually seal the deal on this Bold and the Beautiful reunion.

Liam would inevitably be drawn to Steffy if she let him go. Sally’s (Courtney Hope) already throwing herself at Liam and it probably won’t be long until Hope (Annika Noelle) does the same. That will automatically put them a step below Steffy if she backs off.

Liam secretly likes the chance to win someone over. His track record certainly backs that up. The Bold and the Beautiful spoilers say Liam and Steffy may patch things up sooner or later. Maybe Steffy’s best bet is to drop all the begging and wait for Liam come crawling back!

Do you think Steffy’s groveling is a waste of time? Should she shift gears and try something else? Would Liam be more likely to respond if Steffy moved on? We’ll give you updates as other B&B news comes in. Stay tuned to the CBS soap and don’t forget to check CDL often for the latest Bold and the Beautiful spoilers, updates and news.