The Bold and the Beautiful Spoilers: Steffy Reunites With Liam After Baby Kelly Hospital Crisis – Steam Happy Family At Last

BY Heather Hughes on May 30, 2018 | Comments: 2 comments
Related : Soap Opera, Spoiler, Television, The Bold and the Beautiful 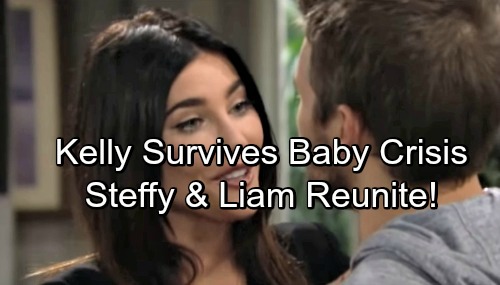 The Bold and the Beautiful (B&B) spoilers tease that Steffy (Jacqueline MacInnes Wood) will suffer through a harrowing ordeal. After early labor brings Kelly into the world too soon, Steffy will fear the worst. She’ll worry that her baby girl may not make it, but Liam (Scott Clifton) will do his best to stay positive. He’ll assure Steffy that their little one is going to survive and thrive.

B&B fans can expect Steffy and Liam’s connection to grow stronger. They’ll bond over their concerns as well as their dreams for the future. It’s been a while since Steffy felt truly close to Liam, but that’ll change thanks to their difficult experience. Having that strong link will be the bright spot in all this. Steffy will finally feel like they’re repairing their relationship, but she’ll battle a hint of doubt.

Liam has a history with Hope (Annika Noelle) and he obviously cares about her. He can’t erase the past or pretend there are no feelings between them. Steffy’s convinced that she’s Liam’s soul mate, but she may worry that Hope will somehow manage to win out. After everything that’s happened, Steffy just can’t be sure of what’s next anymore.

Next week, June 4-8, The Bold and the Beautiful spoilers say Steffy will indeed face uncertainty as she heads home. It sounds like she’ll rest at the cliff house while Kelly remains in the NICU. Let’s hope Dr. Phillips (Robin Givens) has a good report by then. Maybe Kelly will be out of the woods, which will free Steffy’s mind to think about what’s ahead with Liam.

Meanwhile, Liam will have to make a decision. B&B could drag this out, but why bother after all the Kelly drama? Will Liam really bail on Steffy after all they’ve endured? It would trash the character if Liam still walked away from Steffy. He was prepared to build a family with her before Bill’s (Don Diamont) manipulation, so he needs to follow through on that promise.

Liam may break the news to Hope before returning to Steffy’s place. The Bold and the Beautiful spoilers say he’ll have some big updates to pass along, and B&B spoilers say that Steffy WILL get the reunion she’s waiting for. It’d be great to bring their daughter home to live under the same roof. All Steffy wants right now is a healthy baby and the man she loves. They can be a family if Liam will just let them and this time he will.

Liam and Steffy officially reunite after Kelly’s scary crisis and form a family. We’ll keep you posted as other B&B details emerge so expect some problems for the reconciled couple. Stay tuned to the CBS soap and don’t forget to check CDL often for the latest Bold and the Beautiful spoilers, updates, and news.