The Bold and the Beautiful Spoilers: Steffy Snaps, Shoots Bill – Ridge Takes the Fall to Protect His Daughter

BY Kinsley Goldman on February 23, 2018 | Comments: one comment
Related : Soap Opera, Spoiler, Television, The Bold and the Beautiful 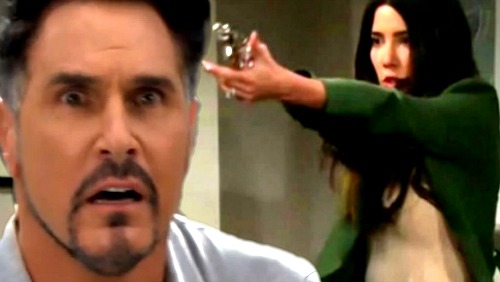 The Bold and the Beautiful (B&B) spoilers tease that Steffy (Jacqueline MacInnes Wood) could be pushed to her breaking point. She was a mess after Liam (Scott Clifton) found out about her hookup with Bill (Don Diamont), but she’s in a more hopeful place these days. Of course, there’s no guarantee Steffy will stay there. Some startling new developments could leave Steffy on the edge!

Steffy was thrilled when Liam came to the ultrasound appointment. She’s also happy that Hope’s (Annika Noelle) trying to help her fix this marriage. Of course, Hope may not be able to resist temptation indefinitely. The Bold and the Beautiful spoilers say Hope and Liam will grow closer through their work projects. Their friendship could easily cross over into love territory.

To make matters worse, Bill’s about to completely lose it. He’ll go off on just about anyone and everyone over the next couple weeks. Ridge (Thorsten Kaye) certainly believes Bill’s to blame for all Steffy’s problems. His opinion could begin to influence his daughter.

Although the sex was consensual, Steffy could start to blame Bill for coming over that night. She wouldn’t be in this mess if he’d just left her alone. Steffy just needed some time to sulk by herself. She probably could’ve gotten past Liam and Sally’s (Courtney Hope) kiss in a day or two.

Instead, Steffy could be facing a future without Liam by her side. She’ll feel like her daughter will miss out on so much if Liam can’t offer forgiveness. Steffy expected to raise this child with Liam and now that perfect plan’s in jeopardy. That could add to the pressure for Steffy as the baby’s birth gets closer.

B&B fans know Bill’s stuck on Steffy, so he could create more stress if he makes another pitch. Bill might be holding out hope for life with her. The Bold and the Beautiful left the door open for some paternity drama as well. If it turns out this baby actually belongs to Bill, Steffy could easily snap!

It’s becoming more and more evident that a shooting is on the way. Who will fire at Bill? Could it be Steffy to pumps the bullet in him? A new clue points in that direction. Ridge mentioned that he would protect Steffy no matter what. Maybe that statement’s foreshadowing a cover-up plot.

Will Ridge take the fall for Steffy? Will he hide her involvement in the upcoming shooting? We’ll give you updates as other B&B news comes in. Stay tuned to the CBS soap and don’t forget to check CDL often for the latest Bold and the Beautiful spoilers, updates and news.