BY Kinsley Goldman on September 20, 2018 | Comments: one comment
Related : Soap Opera, Spoiler, Television, The Bold and the Beautiful 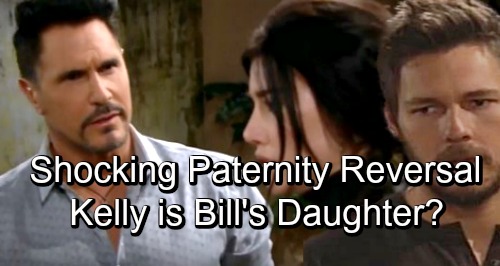 The Bold and the Beautiful (B&B) spoilers reveal that Steffy (Jacqueline MacInnes Wood) just took a somewhat surprising stance. She heard Ridge (Thorsten Kaye) and Brooke (Katherine Kelly Lang) arguing about the custody case, so she decided to weigh in. Steffy had to agree with Brooke on this one. She feels like Bill deserves the chance to be a father to his youngest son, Will (Finnegan George).

That’s not entirely shocking since Bill and Steffy made peace toward the end. After all, he gave her the Forrester shares and is still keeping his mouth shut about Taylor (Hunter Tylor) shooting him. Nevertheless, Bill has made plenty of horrible mistakes. No one would blame Steffy for hating Bill’s guts and supporting Katie’s (Heather Tom) fight, but she seems to have let all her anger go.

When you consider everything Bill put Steffy through, it’s at least a little astonishing that she’s been able to move past it. However, Steffy’s on a new path now. She’s focusing on raising Kelly and building a thriving career. Steffy only sees good things in her future, so she’s just ignoring Hope’s (Annika Noelle) complaints and moving forward.

It’s interesting that B&B let Steffy share her thoughts on the custody drama. She’s busy with other storylines like her feud with Hope and all the intimates line preparations. There could be a good reason the show wanted her to pipe up in support of Bill. Are they setting the stage for a paternity bombshell?

Steffy suggested that she didn’t think Bill should be separated from his son. Would she feel the same way if Kelly turned out to be Bill’s daughter? The Bold and the Beautiful fans have always wondered if there might’ve been some paternity test tampering or even a mix-up. Don Diamont has been vocal about his support of this baby twist, so it’s certainly a possibility to consider.

If Liam (Scott Clifton) isn’t Kelly’s father after all, that could change his relationship with Steffy in a big way. Likewise, it could reignite Bill’s desire to build a relationship and a family with Steffy. There’d be a lot of places to go with a story like this.