BY hellodrdavis on September 20, 2018 | Comments: one comment
Related : Soap Opera, Spoiler, Television, The Bold and the Beautiful 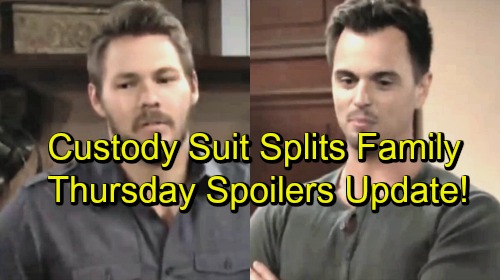 The Bold and the Beautiful spoilers for Thursday, September 20, tease that Bill (Don Diamont) and Ridge (Thorsten Kaye) will continue their heated exchange at Bill’s office. Ridge will continue to gloat about Bill’s weak position in the custody case now that Katie (Heather Tom) and Thorne (Ingo Rademacher) are engaged, and he’ll rub Bill’s nose in the fact that Thorne will be playing “dad” to Will (Finnegan George).

But Bill will puff out his chest and fire back that he doesn’t see his case as weak, and that he’s going to fight Katie’s custody petition with everything he has. “I will not bow down to their demands,” he’ll tell Ridge, and he means it. But Ridge means business too, and later he’ll meet with Judge McMullen, who will be presiding over the custody case.

So it seems that Ridge has some tricks up his sleeves and he’s not beyond playing dirty to ensure that Katie wins the case. But B&B spoilers say that Bill will also take steps to ensure that the custody battle comes out in his favor. What will be Bill’s next move?

Meanwhile, on the new B&B episode on Thursday, September 20, Liam (Scott Clifton) and Wyatt (Darin Brooks) will get together for a chat about their dad’s custody case. They’ll consider what’s at stake in the case and will discuss their conflicted feelings. On the one hand, they’ll want to protect their little brother from their dad’s destructive fatherly “love,” but on the other hand they won’t want to deny Will access to his father.