The Bold and the Beautiful Spoilers: Steffy’s ‘Aha’ Moment – Finally Sees Liam As The Incurable Waffler That He Is

BY hellodrdavis on July 21, 2018 | Comments: one comment
Related : Soap Opera, Spoiler, Television, The Bold and the Beautiful 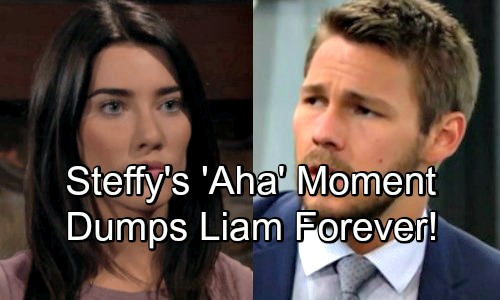 The Bold and the Beautiful spoilers tease that Steffy (Jacqueline MacInnes Wood) is in for a big wake-up call. She’s engaged to Liam (Scott Clifton), who’s got a baby on the way with Hope (Annika Noelle). Steffy has steadfastly believed that Liam would remain committed to her and end up co-parenting with Hope.

But something’s going to happen that will completely alter Steffy’s perception of Liam. Bill (Don Diamont), who has been pressuring Steffy to build a life with him, will show Steffy a photograph of Lope kissing. Unable to believe that the photo is real, Steffy will head to Forrester Creations, where she will find Lope in the middle of a passionate kiss. 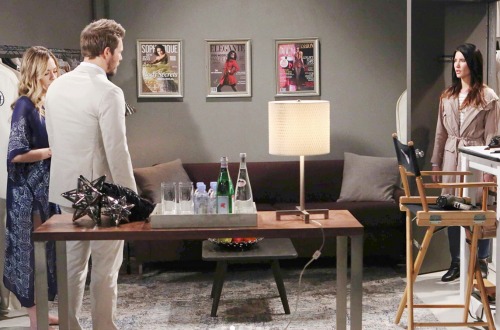 Psychologically, this will be a major event for Steffy. Bill has been trying to convince her that Liam is a waffler who will always be drawn to Hope, and Steffy has consistently rejected that idea. But when she actually sees Lope’s passionate embrace, she won’t be able to deny any longer that what Bill says is true. In an instant, her perception of Liam will change.

Steffy will likely start seeing Liam as the man who could make one of her worst nightmares come true: that she ends up involved in an ongoing love triangle like her mother did with Brooke (Katherine Kelly Lang). Steffy won’t want that for herself or for Kelly, so she’ll be open to another option…a life with Bill. B&B spoilers say that Steffy will tire of Liam’s ways and agree to start a life with Bill. 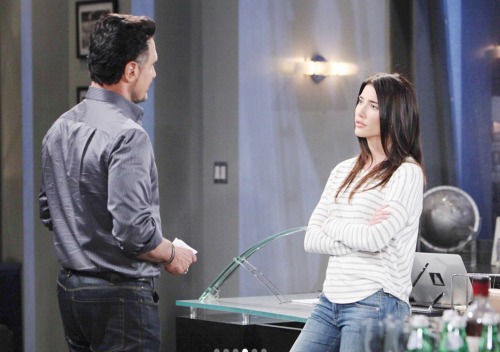 It’s a move that will be shocking to others, but from Steffy’s perspective it will make absolute sense. What Bill has been saying all along about the two of them being a good match and Bill providing stability will really hit home with Steffy. Plus, a part of her might want to make Liam pay for his waffling ways and canoodling with Hope, and what better way than to take up with Bill.

Being with Bill will give Steffy the chance to be with someone who’s 100% into her. Do you think it’s a good move for her? Stay tuned to the CBS soap and don’t forget to check CDL often for the latest Bold and the Beautiful spoilers, updates, and news.