The Bold and the Beautiful Spoilers: Ridge Blows His Top Over ‘Still’ – Seethes After Bill Gives Steffy His Sword Necklace

BY Marcy Cohen on July 21, 2018 | Comments: one comment
Related : Soap Opera, Spoiler, Television, The Bold and the Beautiful 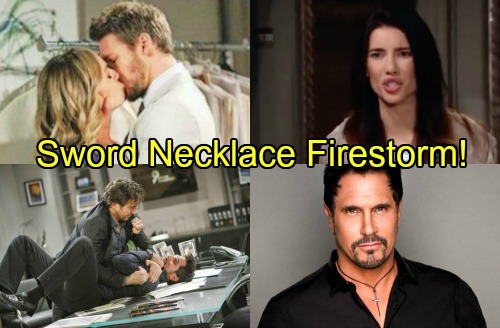 The Bold and the Beautiful (B&B) spoilers tease that Ridge (Thorsten Kaye) is in for a shock. B&B fans know he’s firmly on “Team Steam.” Ridge just wants Steffy (Jacqueline MacInnes Wood) to have a wonderful life with Liam (Scott Clifton) and Kelly. He understands that Hope (Annika Noelle) and her kid would be left on the outside, but someone has to be. Liam can only pick one woman here.

Unfortunately, Ridge will soon get some terrible news. Thanks to Bill (Don Diamont), Steffy will end up with a picture of Hope and Liam kissing. She’ll march over to Forrester Creations in hopes of getting an explanation. Steffy will hope that Bill’s wrong about this. She may suggest that he tampered with the photo to mess with her.

Sadly, Steffy will see another kiss and Liam on top of half-naked Hope right before her very eyes. She’ll walk in on Liam and Hope and have a meltdown so that’s sure to be rough. In fact, it’ll be enough to put an end to “Steam” – at least for now. The Bold and the Beautiful spoilers say Steffy will  turn her back on Liam and become a couple with Bill. He’ll vow to give Steffy all the commitment she craves.

After Steffy decides Bill is her future, he’ll give her his sword necklace. Bill will urge Steffy to wear it proudly and trust that she’s making the right decision. He’ll be absolutely thrilled that they’re finally an item. Meanwhile, it looks like Ridge will hear about the “Lope” cheating incident. He’ll undoubtedly want to check on Steffy and keep her focused on winning Liam over.

Instead, Ridge will see something that enrages him. He’ll spot Bill’s sword necklace and completely blow his top! Ridge hates Bill with a passion, so he doesn’t want him anywhere near his daughter. He’ll wonder what in the world Steffy thinks she’s doing.

Ridge will insist that this is a mistake and order Steffy to take the necklace off. Of course, Steffy won’t be willing to do that. She’ll contend that she’s done with Liam’s waffling. Steffy will admit Bill isn’t her ideal mate, but he loves her and wants to be there for Kelly as well. She’ll think that a life with Bill is better than the alternative. Hope’s always going to be pulling Liam in her direction.