BY hellodrdavis on October 15, 2018 | Comments: 2 comments
Related : Soap Opera, Spoiler, Television, The Bold and the Beautiful 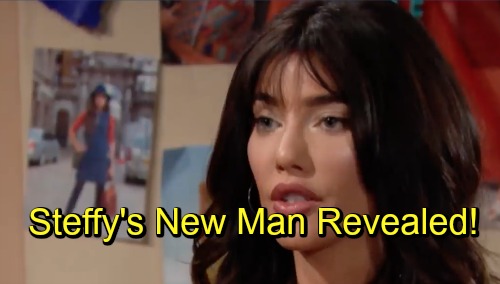 The Bold and the Beautiful (B&B) spoilers tease that Steffy (Jacqueline MacInnes Wood) is doing just fine on her own these days. Ever since she removed herself from the love triangle with Liam (Scott Clifton) and Hope (Annika Noelle), she’s been determined to put herself and baby Kelly (Gabriel Sporman) first, and she’s been doing a great job. She’s flourishing at Forrester as co-CEO and with her newly launched Intimates line, and Kelly’s thriving at home.

But many fans have noted that it’s about time for Steffy to move on and find a new love interest. Things tend to move fast on B&B, and Steffy being without a man in her life for the past couple months is significant. That’s a long time for someone to be single on B&B! So, who will be Steffy’s new love interest? Below we consider the front-runners and examine the evidence for a possible pairing.

First on our list is Bill. Even though he’s been distracted lately with Brooke (Katherine Kelly Lang), it seems that Bill will always be at the top of the list for being a potential love interest for Steffy. Despite all of the negativity that Steffy feels for Bill as the result of their one-night stand and its aftermath, there will always be a connection between the two.

“Still” fans are holding out hope for an eventual paring. It really seemed that TPTB were going in that direction when Steffy donned the sword necklace and almost married Bill a while back, yet it never came to pass. But could Steffy and Bill be drawn back toward each other?

It’s certainly a possibility, especially if it turns out that Kelly is revealed to be Bill’s baby. It doesn’t look like there are plans to go that route at the moment, but you know how things are on soaps. The issue of Kelly’s paternity could always be revisited in the future, and it could be the catalyst that brings Steffy and Bill together.

Next on our list as Steffy’s possible next love interest is Wyatt (Darin Brooks). Sure, Wyatt is with Sally (Courtney Hope) right now, and things look great between them. But Steffy and Wyatt have been sharing some scenes lately, and many fans have noted that they share good chemistry together. Could it be a test run to see if fans respond well to this potential pairing? You never know.

Now that Wyatt is working at Forrester, there’s the possibility that he, Sally, and Steffy could form a new love triangle. Or at least there could be some sparks of jealousy on Sally’s part as Steffy and Wyatt work together. Perhaps TPTB want to bring back the Steffy/Sally rivalry again, and putting Wyatt in the middle would be a great way to do it.

Of course, Liam is also a contender for Steffy’s next love interest. She’s vowed to be done with Liam and has given Liam and Hope her blessing, but you never know what could happen that could lead Steffy back into Liam’s orbit. While it’s doubtful that Steffy will actively do anything to break up “Lope,” she might fall back into Liam’s arms if Lope break up on their own.

It’s a terrible thought, but if Lope experience a miscarriage, then their marriage could be on the rocks. Liam might need a friend and sympathetic ear, and Steffy could be that person. Plus, Steffy and Liam will always be connected through Kelly, and that could always lead to something more. There are surely a lot of fans out there hoping for an eventual “Steam” revival.

Carter and Steffy could start out by just hanging out and catching up, and then it could lead to more. Since the two have never dated before, it would be fresh and new, and Carter could properly romance Steffy. And it wasn’t that long ago that Lawrence Saint-Victor, who portrays Carter, mused to Soap Opera Digest that it would make sense to give “Starter” a go. They’d be a cute couple.

Steffy’s re-vamp of the Intimates line has put her face-to-face with the uber-attractive Forrester models. Perhaps she’ll get close to one of them and go out on a date or two. In a way, it would be nice to see Steffy with someone totally new to the scene. It would be a fresh start.

A while back, there was buzz that Nic Palladino, one of the Forrester models, might be a potential love interest for Steffy, and it could still happen. So far, Nic’s character hasn’t interacted with Steffy much on-screen, but that could change. Given that Steffy is modeling for the Intimates line, too, the two could interact more in the future.

What’s your take? Who do you think Steffy’s next love interest will be? Stay tuned to the CBS soap and don’t forget to check CDL often for the latest Bold and the Beautiful spoilers, updates, and news.