The Bold and the Beautiful Spoilers: Taylor and Zoe Drama Ahead for Dr. Reese Buckingham – Family Chaos and Love Complications 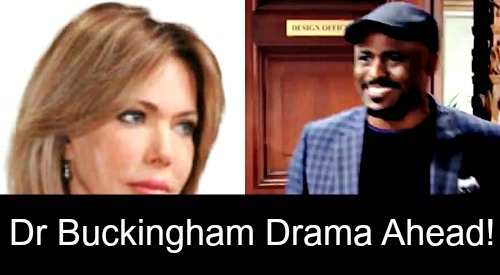 The Bold and the Beautiful (B&B) spoilers tease that Dr. Reese Buckingham (Wayne Brady) will get caught up in several storylines. For starters, there’s the reason for Reese’s arrival in town. He’s landed a job in Los Angeles, but this isn’t really about advancing his career. Dr. Buckingham will mainly want to be closer to his daughter, Zoe (Kiara Barnes).

Reese will hope that by reducing the physical distance, he can reduce the emotional distance, too. There are some deep issues between this father-daughter duo, so Reese will hope they can work on them. He won’t be ready to just throw in the towel and give up on their relationship.

However, Zoe seems content with the way things are. She won’t like the idea of Reese hovering and judging her. Zoe would much rather have Reese across the pond and just keep in touch through a few phone calls. She’s got a brand-new life in LA, so she’ll fear that Reese will cramp her style.

The Bold and the Beautiful spoilers say Reese will indeed judge Zoe’s choices. Her budding career as a lingerie model will certainly cause some conflict. Dr. Buckingham will want to guide Zoe down the path of his choosing, but will he end up blowing up her world instead?

From the get-go, B&B fans could tell Zoe had the potential to snap. She’s a tad on the crazy side, so there’s no predicting what’ll happen if Reese pushes too hard. If Reese messes up Zoe’s life too much, she may lash out in some wild ways.

The love triangle with Xander (Adain Bradley) and Emma (Nia Sioux) wrapped up a little too neatly anyway. If Zoe proves she’s nuts, Xander may drift back in Emma’s direction. That could definitely feed Zoe’s crazy side as well.

Of course, Dr. Buckingham will interact with other characters during his B&B stint. The Bold and the Beautiful spoilers hint that Reese and Taylor (Hunter Tylo) will hit it off next week, December 3-7. There’ll be a spark right away, so a love story could be brewing. If that turns into something substantial, let’s hope Reese can see the warning signs in Taylor and support her. She clearly needs more help than she’s gotten thus far.

The Bold and the Beautiful spoilers say Reese’s background will come with some secrets and shockers, too. There’s more to him than meets the eye, so stay tuned to watch some mysteries unravel. We’ll give you updates as other B&B news comes in. Stick with the CBS soap and don’t forget to check CDL often for the latest Bold and the Beautiful spoilers, updates and news.