The Bold and the Beautiful Spoilers: Taylor Attacks Brooke for Blasting Steffy – Heated Showdown Spirals Out of Control 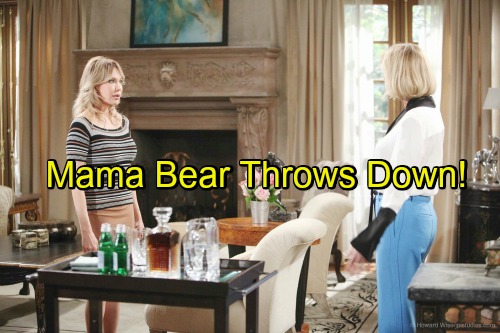 The Bold and the Beautiful (B&B) spoilers tease that Steffy (Jacqueline MacInnes Wood) will finish off a vicious battle with Brooke (Katherine Kelly Lang). She’ll have more harsh words regarding Hope’s (Annika Noelle) behavior, but Brooke will be just as cruel in her comments about Steffy. Once all the insults have been hurled, Steffy will storm out and unload her problems on Taylor (Hunter Tylo).

B&B fans can expect Taylor to fume once she gets updates. Steffy will be both distraught and furious. Her emotions will pour out as she explains what Brooke said and how she was treated. Taylor will hate that she can’t secure Steffy’s happiness. She’ll want her daughter to get the reunion she’s dreaming of, but that’s beyond her control.

However, handling Brooke is certainly something Taylor can take charge of. The Bold and the Beautiful spoilers say Taylor’s rage will build during her conversation with Steffy. By the time they’re through, Taylor will be ready to attack! She’ll march over to Brooke’s place for an explosive confrontation. Taylor won’t stand by and let Steffy endure all this criticism.

After Taylor shows up, Brooke will have to deal with her rival’s wrath. The Bold and the Beautiful spoilers say we’ll see an intense showdown. Naturally, Brooke will defend Hope and argue that Steffy’s the one meddling. She’ll feel like Steffy should accept Liam’s (Scott Clifton) choice and move on.

Taylor obviously won’t agree and she won’t appreciate Brooke’s decision to butt in either. Her anger will really spiral out of control. Steffy and Hope may get in on this fight soon. They might as well make this a full-on mother-daughter war!

Brooke has made it clear that she’ll stand by Hope, so Taylor will undoubtedly do the same. Which side has the best shot of winning? It probably won’t matter in the end. Bill’s (Don Diamont) deception and Liam’s heart seem like the most important elements in this storyline. Once Liam learns the truth, it’ll level the playing field and let him choose the woman he truly wants.

It sounds like some exciting scenes are on the way. We’ll keep you posted as other B&B news comes in. Stay tuned to the CBS soap and don’t forget to check CDL often for the latest Bold and the Beautiful spoilers, updates, and news.