The Bold and the Beautiful Spoilers: Thorne Pops The Question To Katie – Katie Faces Life-Altering Decision

BY hellodrdavis on September 3, 2018 | Comments: one comment
Related : Soap Opera, Spoiler, Television, The Bold and the Beautiful 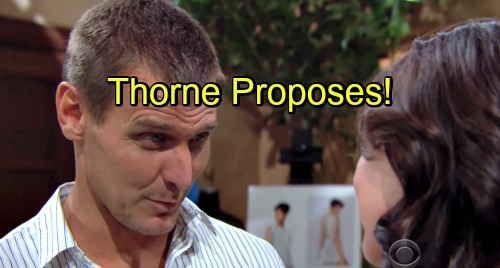 The Bold and the Beautiful spoilers tease that Katie (Heather Tom) will soon face another dilemma. She’s been struggling with the issue of Will’s (Finnegan George) custody lately, and for good reason. She’s got her son’s best interest at heart, but she knows that starting a custody battle will mean an ugly fight with Bill (Don Diamont), which may itself hurt Will.

It doesn’t look like Thorne will let up on Katie anytime soon. He seems to always be there, professing his love for her and promising to support her in her pursuit of custody for Will. And it seems that he’ll soon start nudging Katie to take their relationship to the next level.

B&B spoilers say that Thorne will soon ask a very important question. Will he propose marriage to Katie? That sounds like something Thorne would do right about now. He’s headstrong and knows what he wants, and he seems obsessed with Katie as well as her custody battle. He may figure that now’s the right time to propose marriage.

Thorne may figure that he would eventually propose marriage to Katie anyway, so why put it off when it can aid in her custody case now? Katie would be able to go to court and explain that Will would have the loving support and stability of a doting mom and step-dad if she were to gain full custody.

But will Katie want to marry Thorne? So far, Thorne has professed his love to Katie several times, but Katie hasn’t exactly responded in kind. Things may be moving a bit fast for Katie, and while she may be flattered by his marriage proposal, she just may not be ready to settle down with Thorne yet.

Do you think that Thorne’s going to pop the question? And if so, what will Katie do? Stay tuned to the CBS soap and don’t forget to check CDL often for the latest Bold and the Beautiful spoilers, updates, and news.