The Bold and the Beautiful Spoilers: Thorne’s Sneaky New Custody Tactic – Gets Liam and Wyatt To Testify Against Bill

BY hellodrdavis on September 17, 2018 | Comments: 2 comments
Related : Soap Opera, Spoiler, Television, The Bold and the Beautiful 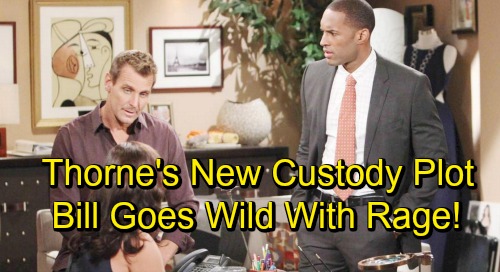 The Bold and the Beautiful spoilers tease that Thorne (Ingo Rademacher) has some tricks up his sleeve when it comes to Katie’s (Heather Tom) custody case against Bill (Don Diamont). Katie has filed for full legal custody of Will (Finnegan George), and Bill has made it clear that he’s going to come at her with everything he’s got.

But Katie’s got a lot of dirt that she could spill on Bill, too. Bill has done some truly horrible things to his grown sons that the judge would be interested in knowing about. But will Katie go there? Katie has been a bit hesitant about the entire suit from the get-go, and she still has her doubts, even though she’s officially filed the paperwork.

It’s Thorne who has really been the driving force of the custody suit. The suit was his idea in the first place, and it was also his idea to marry Katie right away so that he and Katie could show the judge that Katie can provide the more stable home for Will.

It looks like Thorne will continue to drive the lawsuit, and the lawsuit strategy. B&B spoilers say that Thorne will come up with a new tactic to help Katie win. Will he insist that Katie get Liam (Scott Clifton) and Wyatt (Darin Brooks) to testify on her behalf at the hearing? Thorne might personally appeal to Liam and Wyatt to tell the judge personally what Bill has done to them.

Their testimony could really hurt Bill’s case. Liam could explain how Bill tried to come between him and Steffy (Jacqueline MacInnes Wood) and how Bill actively pursued/stalked Steffy. And Wyatt could explain how Bill used him and promised him the “keys to the kingdom” if he kept his mouth shut about all of Bill’s lies. It would look terrible for Bill.

But Thorne might have an uphill battle trying to convince Liam and Wyatt to testify against Bill. Sure, Bill has done awful things to them, but do they really want to rip Bill away from Will? They may be unwilling to deny Will a relationship with their father, or at least be reluctant to testify against their dad.

Do you think Thorne will get Liam and Wyatt to testify against Bill in the custody dispute? Stay tuned to the CBS soap and don’t forget to check CDL often for the latest Bold and the Beautiful spoilers, updates, and news.