The Bold and the Beautiful Spoilers: Thursday, April 5 – Hope’s Passionate Plea to Liam – Wyatt Fears the Shooter Is Close

BY Heather Hughes on April 4, 2018 | Comments: one comment
Related : Soap Opera, Spoiler, Television, The Bold and the Beautiful 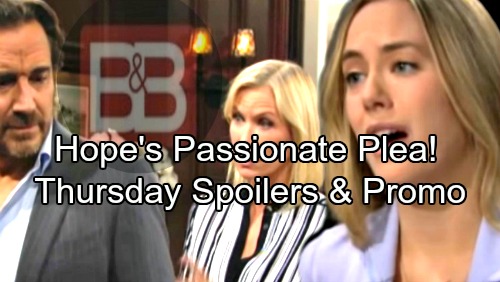 The Bold and the Beautiful (B&B) spoilers for Thursday, April 5, tease that Steffy (Jacqueline MacInnes Wood) will try to shove her fears aside. She’ll worry that Hope’s (Annika Noelle) off making her move with Liam (Scott Clifton), but she’ll do her best to focus on her own plan. Steffy desperately wants this reunion to happen. She’ll hope to convince Liam that he belongs with her at home.

Of course, Steffy has no idea that Liam and Hope just locked lips. In fact, Hope argued that Liam should end his marriage and start fresh. She clearly wants to be part of that new beginning. B&B spoilers say Hope will make another passionate plea on Thursday. She’ll try to make Liam see the benefits of walking away from his current situation.

Hope will contend that Liam can make a new life without Steffy and Bill’s (Don Diamont) drama. She’ll express concern about them potentially causing more pain. Hope will think it’s time to just cut ties and concentrate on a better future.

While Hope gives Liam something to think about, the celebration will continue over at Forrester Creations. Ridge (Thorsten Kaye) is relieved now that he’s been cleared of the attempted murder charges. He’s ready to get back down to business, but Wyatt (Darin Brooks) will bring up a good point. 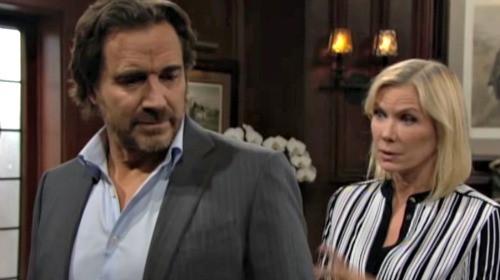 The Bold and the Beautiful spoilers say Wyatt will fret about the real culprit. He’ll note that someone dangerous is still on the loose. Wyatt will suggest that the guilty party could be in their inner circle. He’ll think they have to be careful with this deadly threat running around.

Wyatt’s in for a shock whenever the truth comes out. Liam’s the one who shot Bill, but he’s probably the last person Wyatt would expect. Will Liam confess to his brother eventually or will Wyatt have to find out along with everyone else? Regardless, some stunning moments are coming up down the road.