BY Heather Hughes on August 8, 2018 | Comments: one comment
Related : Soap Opera, Spoiler, Television, The Bold and the Beautiful 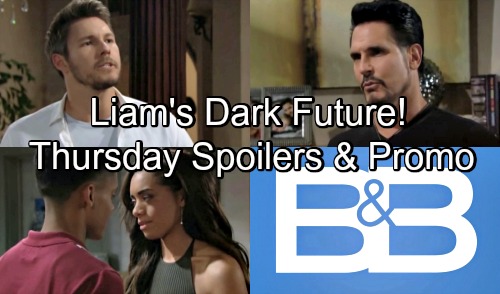 The Bold and the Beautiful (B&B) spoilers for Thursday, August 9, tease that Liam (Scott Clifton) will respond to Bill’s (Don Diamont) emotional plea. This remorseful father desperately wants to make amends. Bill knows he derailed Liam’s life and messed things up with Steffy (Jacqueline MacInnes Wood). He’s taken responsibility for that, but he realizes that’s not enough to patch things up.

Bill’s holding out hope that Liam will soften one day and agree to be a family again. It’d mean the world to Bill, but he should really lower his expectations. Liam may indeed forgive Bill at some point, but it’s not going to be now. The wounds are still fresh, so Liam needs time. It could be months or even years before they have a solid father-son bond again – if they ever do.

The Bold and the Beautiful spoilers say Liam will make Bill a promise. He’ll note that he’s going to be a better dad to Kelly and his child with Hope (Annika Noelle). Liam will want to be a good role model and show his kids what love truly means. He’ll make it clear that he intends to be the total opposite of Bill.

B&B fans can expect resentment to ooze from Liam’s voice. Bill will sense that this grudge could become dangerous. He’ll warn Liam not to hate him the way he hated his own father. Bill’s rage for his old man somehow turned him into a copy of him. He won’t want Liam to end up on that same dark path.

Liam will insist that he’s in control of his own destiny – at least now that Bill’s stopped meddling. However, Bill’s warning could be a hint about what’s to come. Will Liam find himself going down a dark road after all? That’d certainly lead to an interesting Bold and the Beautiful story.

Elsewhere, Xander (Adain Bradley) will continue to comfort Zoe (Kiara Barnes). Her beloved cat just died, so she’ll be quite distraught over poor Harry. Later, Pam (Alley Mills) will offer her sympathy as well. She adores animals, so that’ll help her form a connection with Forrester’s newest hire.

Emma (Nia Sioux) will seethe when she sees Pam and Zoe hitting it off. She’ll feel like no one is taking this threat seriously. The Bold and the Beautiful spoilers say more drama’s coming up in Xander and Emma’s relationship, so stay tuned. We’ll give you updates as other news emerges. Stick with B&B and don’t forget to check CDL often for the latest Bold and the Beautiful spoilers, updates, and news.