The Bold and the Beautiful Spoilers: Manipulative Bill Finds His Next Victim – Steffy’s Safe, But Katie’s in Trouble

BY Heather Hughes on August 8, 2018 | Comments: one comment
Related : Soap Opera, Spoiler, Television, The Bold and the Beautiful 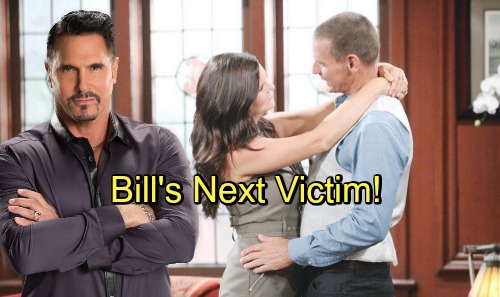 The Bold and the Beautiful (B&B) spoilers tease that Bill (Don Diamont) will find another woman to pester. Steffy’s (Jacqueline MacInnes Wood) finally free of Bill’s endless chasing and tormenting. That’s great news for her, but not-so-great news for Bill’s next victim. B&B fans know he can’t stand it if he’s not stirring up trouble. It won’t be long until somebody else gets stuck in “Dollar Bill” drama.

Katie (Heather Tom) had a delightfully easy breakup with Wyatt (Darin Brooks). For two people who wanted to marry at one time, they certainly had no problems moving on. Katie let Thorne (Ingo Rademacher) kiss her almost immediately after “Watie” split, so she obviously wasn’t too heartbroken.

Wyatt quickly moved on with Sally (Courtney Hope) as well. Bill was dead-set against Wyatt and Katie as a couple, so you’d think he’d be satisfied. Unfortunately, it seems Bill will disapprove of Katie’s latest love interest, too. He’ll probably use Will (Finnegan George) as a way to object and cause chaos.

Bill may argue that Thorne’s spending too much time with Will. He may believe his role as a father’s being threatened. Bill definitely doesn’t want Will to grow up with all this Forrester influence. He’s determined to make sure the kid’s a Spencer through and through.

However, Katie won’t think Bill’s in any position to control her love life. She can date anyone she pleases and let him hang out with Will anytime he likes. The Bold and the Beautiful spoilers say Thorne will back Katie up on that, so it’ll spark a fierce confrontation. Bill, Thorne and Katie will all end up battling it out soon enough.

The conflict will eventually die down, but Bill will insist that this isn’t over. He might even pull the custody card again. Whenever Katie doesn’t something he disapproves of, Bill tends to hold that threat over her. He’s got friends in high places and plenty of money to toss at them. It’s safe to say almost any Los Angeles judge would be in Bill’s pocket.

Of course, Katie may call Bill’s bluff and keep doing what she wants. She’s bound to be getting tired of her ex’s outbursts by now. Sadly, Bill will indeed manage to cause issues for Thorne and Katie. The Bold and the Beautiful spoilers say Bill will come between them somehow, so working through the strife should be difficult.

Despite Bill’s bad attitude, this could be setting up a new love triangle. There’s a fine line between love and hate, so Katie could find herself caught between Thorne and Bill down the road. We’ll give you updates as other B&B details emerge. Stay tuned to the CBS soap and don’t forget to check CDL often for the latest Bold and the Beautiful spoilers, updates, and news.