The Bold and the Beautiful Spoilers: Thursday, December 13 – Hope and Brooke Argue – Zoe and Xander Interrupted

BY hellodrdavis on December 12, 2018 | Comments: one comment
Related : Soap Opera, Spoiler, Television, The Bold and the Beautiful 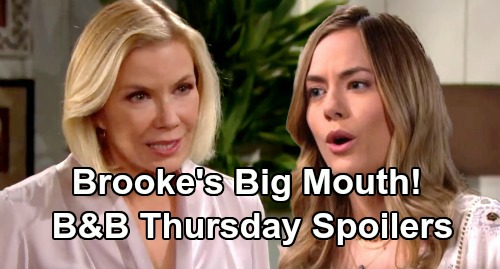 The Bold and the Beautiful spoilers for Thursday, December 13, tease that Brooke (Katherine Kelly Lang) and Hope (Annika Noelle) are in for a major argument. Brooke nearly told Katie (Heather Tom) and Donna (Jennifer Gareis) that Taylor (Hunter Tylo) shot Bill (Don Diamont) earlier this year, and Hope nearly freaked out. Now, the two of them will have words over Brooke’s near-disclosure.

Brooke doesn’t seem to care that she made a promise not to tell anyone else about Taylor shooting Bill. Brooke is very worried about Kelly’s (Zoe Pennington) safety and the safety of Hope’s unborn daughter, and she’d like to keep Taylor as far away from them as possible. As far as she’s concerned, safety trumps any promise she made to Hope.

But Hope will not appreciate her mother’s perspective. Liam (Scott Clifton) told Hope the news about Taylor shooting Bill in confidence, and now Hope feels an obligation to keep the secret from spreading. None of this will be good for Hope. She doesn’t need any additional stress right now, and it can’t be good for her pregnancy.

Meanwhile, on the new episode of B&B on Thursday, December 13, Zoe (Kiara Barnes) and Xander (Adain Bradley) will try to share an intimate moment, but they’ll suffer from some unfortunate interruptions. First, Tiffany (Maile Brady) will bust in on their moment. Perhaps she’ll be looking for Emma (Nia Sioux) and find the two lovebirds instead.

Next, Reese (Wayne Brady) will barge in on Zoe and Xander, and this time the interruption will likely irritate Zoe to no end. Zoe is already miffed that her father is intruding on her life in Los Angeles, and she especially won’t want him to come between herself and Xander.