BY Heather Hughes on July 18, 2018 | Comments: one comment
Related : Soap Opera, Spoiler, Television, The Bold and the Beautiful 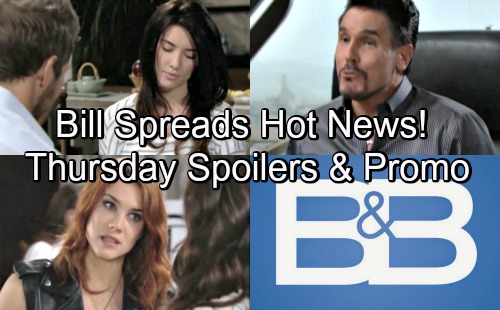 The Bold and the Beautiful (B&B) spoilers for Thursday, July 19, tease that Liam (Scott Clifton) will chat with Steffy (Jacqueline MacInnes Wood) at home. When pressed, Liam may admit Brooke (Katherine Kelly Lang) summoned him to offer advice. Steffy obviously won’t be happy about that. She’ll inevitably think Brooke’s trying to turn Liam against her, which is exactly right.

Talk will turn to the fashion show and the positive buzz it’s generating. This could be great for Forrester Creations, but Steffy won’t seem thrilled about it. Hope’s (Annika Noelle) name is attached, so Steffy may struggle to get behind the whole thing. She’ll note that Hope’s going to have plenty of support at the event, but she apparently has no intention of attending.

Meanwhile, Hope and her team will gather for a pre-show meeting. This Hope for the Future launch is a big deal, so Hope will want to make sure they’re prepared. She’ll remind everyone of their duties as the countdown to fashion begins.

Unfortunately, Emma (Nia Sioux) will be a bit distracted. She’s got a B&B dance number coming up, but she won’t be able to keep her mind on it. When Sally (Courtney Hope) realizes something’s up, she’ll probably suspect this is about Zoe (Kiara Barnes).

The Bold and the Beautiful spoilers say Emma will admit she’s still rattled. She’s really starting to fall for Xander (Adain Bradley), so she doesn’t want Zoe to mess everything up. Sally will suggest that Emma shouldn’t get jealous. She’ll contend that Zoe’s a total nut job, so there’s no way Xander wants her back. Sally will boost Emma’s confidence for now, but more trouble will hit in Friday’s episode.

Other Bold and the Beautiful spoilers say Bill (Don Diamont) will have huge news for Justin (Aaron D. Spears). He’ll insist that it’s good enough to deserve a drumroll. After tapping his desk a few times, Bill will announce that Hope’s pregnant. He’ll insist that his pursuit of Steffy is back on, but Justin won’t think that’s the best idea.

Nevertheless, Justin knows how his boss operates. If “Dollar Bill” really wants something, there’s no talking him out of it. B&B spoilers say Bill will seek a crucial favor from Justin before the week’s over. We’ll give you updates as other details emerge. Stick with the CBS soap and don’t forget to check CDL often for the latest Bold and the Beautiful spoilers, updates, and news.