The Bold and the Beautiful Spoilers: Bill Gets His Dream Girl – Fed-Up Steffy Dumps Cheating Liam, Builds Life with Bill Instead 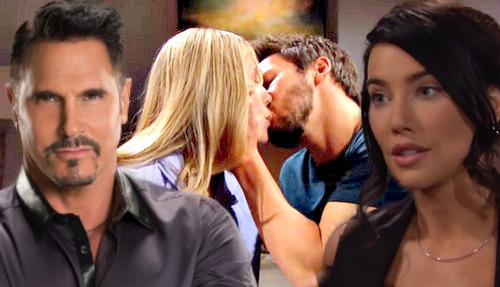 The Bold and the Beautiful (B&B) spoilers tease that Steffy (Jacqueline MacInnes Wood) will feel backed into a corner. Bill’s (Don Diamont) manipulation will once again leave her devastated, but he’ll believe he’s just opening her eyes. In some ways, Bill may be right about that.

B&B has established that Liam is a chronic waffler. He’s never going to change, so Steffy either needs to accept that or dump Liam. Naturally, Bill’s hoping she’ll choose the latter! The Bold and the Beautiful spoilers say Bill will put a three-part plan in motion. He’ll start by making sure a photo of Liam and Hope (Annika Noelle) ends up in Steffy’s hands.

This scandalous pic will feature a “Lope” kiss, but part of Steffy won’t want to believe it. She may accuse Bill of doctoring the photo or perhaps taking it out of context somehow. Steffy knows Liam isn’t feeling certain about his future anymore, but she still thought she had a real shot with him.

However, Bill will urge Steffy to visit Forrester Creations and see for herself. He’ll set it up so Steffy can view another lip lock and come crawling back to him in despair. Just as Bill predicted, Steffy will witness Liam and Hope’s kiss for herself. That’ll complete the second part of Bill’s scheme for love.

Once he’s done with all that, Bill can focus on something he’s practiced dozens of times. He’ll do what he does best and beg Steffy to be with him. That’ll mark the last step in Bill’s plan. The Bold and the Beautiful spoilers say Bill will urge Steffy to trust that he’s fully committed to her. He’ll promise he’ll always be there for Steffy and the baby.

This isn’t the ideal situation for Steffy, but she’ll start to see the benefits of stability. Bill’s pretty much a fixated stalker, but he’ll treat Steffy like a queen – at least until he finds a new obsession. For now, Steffy will believe Bill’s actually the better Spencer.

B&B apparently doesn’t think a smart, strong career woman is capable of being a single mom. It’s bizarre, but maybe we can chalk it up to Steffy’s vulnerability. She’ll be feeling awfully low and Bill knows how to prey on that.

The Bold and the Beautiful spoilers say Steffy will finally cave in next week. Bill will convince her that Kelly needs a two-parent home, so she’ll start a new life with her former father-in-law. It’s not what Steffy wants, but she’ll believe it’s what she needs to do for her daughter.

How long until Liam ditches Hope and waffles back Steffy’s way? Will Steffy stand by Bill if Liam wants her back? We’ll give you updates as other B&B news comes in. Stay tuned to the CBS soap and don’t forget to check CDL often for the latest Bold and the Beautiful spoilers, updates, and news.