The Bold and the Beautiful Spoilers: Steffy Catches Liam and Hope in a Compromising Position – Bill’s Evil Plan Pays Off 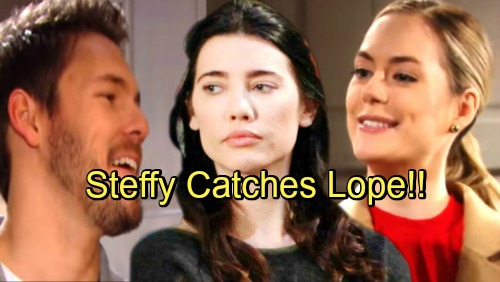 The Bold and the Beautiful (B&B) spoilers tease that Bill (Don Diamont) will devise another one of his brilliant schemes. At least he’ll think it’s brilliant! Bill’s plans don’t always work out as well as he hopes, but he’ll carry out the necessary steps anyway and expect success. He’ll have a good feeling since he’s got an advantage this time.

Thanks to Hope’s (Annika Noelle) pregnancy, Bill’s chances of winning Steffy (Jacqueline MacInnes Wood) just got better. He knows Liam’s (Scott Clifton) a born waffler, so his son could easily head back in Hope’s direction. Plus, Hope’s going to fight for her man. The pull of their history and their little one could be too difficult to resist.

However, Bill will decide he needs an insurance policy. He wants to guarantee a “Lope” reunion and as a result, seal the deal on “Still.” Besides, Bill isn’t a very patient guy. There’s no way he can just sit back and wait for Liam to make up his mind. He’d rather get the ball rolling on this right now!

B&B spoilers say Bill will start by digging for dirt on Liam. It looks like he’ll trust Justin (Aaron D. Spears) to handle that task. Once Bill’s got what he needs, he’ll leave the bait for Steffy to find. Perhaps she’ll discover something that makes her believe Liam deceived her. Whatever the case, Steffy will definitely want an explanation. She may rush off to find Liam and get some answers ASAP.

That brings us to the next phase of Bill’s plot. He’ll create a situation that looks awfully discouraging to Steffy. The Bold and the Beautiful spoilers say Bill will make sure Liam and Hope get caught together. It’s tough to believe Liam would hop back in bed with her already, but stranger things have happened on B&B. Nevertheless, a kiss or other warm moment seems more likely.

Steffy will be crushed when she sees this setup, so it’ll put her in a vulnerable place. Naturally, it won’t be long until Bill pays her a visit. He’ll hope Steffy’s ready to accept defeat in her current love triangle. Steffy may not throw in the towel just yet, but she’ll definitely lose confidence. That’ll encourage Bill to follow through on the rest of his scheme.

The Bold and the Beautiful spoilers say Bill has a few more tricks in store. Once he wraps up his latest round of sneakiness, he’ll count on all their lives changing for the better. In Bill’s twisted brain, he still believes he’s doing everyone a favor.

Will Bill’s scheming once again blow up in his face? Will he actually get what he wants for a while? We’ll give you updates as other B&B news comes in. Stay tuned to the CBS soap and don’t forget to check CDL often for the latest Bold and the Beautiful spoilers, updates, and news.