BY Heather Hughes on July 25, 2018 | Comments: one comment
Related : Soap Opera, Spoiler, Television, The Bold and the Beautiful 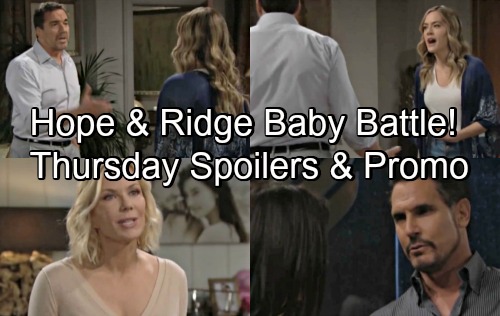 The Bold and the Beautiful (B&B) spoilers for Thursday, July 26, tease that Bill (Don Diamont) will reassure a frazzled Steffy (Jacqueline MacInnes Wood). She’s been through a lot, but she knows what she wants. Steffy agreed to be with Bill, but only if he signed over his Forrester shares. Of course, Bill was quick to get the details worked out for her. Now Steffy just has to keep her end of the bargain.

Steffy should be hesitant to have a flashy wedding. Since she just gave birth to Liam’s (Scott Clifton) child, marrying Bill would obviously cause a scandal. However, Bill won’t want Steffy to worry about that. He’ll be content with some private nuptials. Bill will insist that he doesn’t have to announce their wedding day to the world. As long as he knows Steffy is his wife, that’ll be enough.

Meanwhile, Ridge (Thorsten Kaye) and Hope (Annika Noelle) will have a heated argument. When Hope explains the whole changing room story, Ridge will fly into a rage. He’ll be appalled that Liam (Scott Clifton) and Hope would do something like this.

B&B fans know whose side Ridge is on. He’s firmly on “Team Steam,” so he’ll explain why Steffy and Liam belong together. Ridge will shout that Steffy is the mother of Liam’s child, but Hope will fire back that she is, too. She’ll be sick and tired of Ridge acting like only Steffy’s feelings are at stake.

Elsewhere, The Bold and the Beautiful spoilers say Brooke (Katherine Kelly Lang) will have another chat with Liam. He’ll confess his guilt over what Steffy witnessed and wish he could make it up to her. However, Brooke won’t think Liam has any reason to be sorry. She may argue that Steffy knew things were up in the air.

Furthermore, Brooke won’t believe Liam should ever regret his intense love for Hope. She’ll push him to accept that they’re meant to be, but Liam may not be sure yet. That could certainly change once he finds out about Steffy and Bill’s deal.