The Bold and the Beautiful Spoilers: Thursday, October 11 – Steffy Ready to Drop Kiss Bomb – Brooke Stuns Katie with the Truth 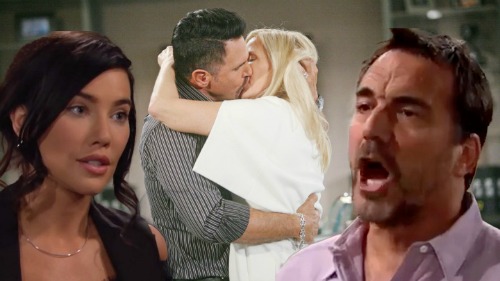 The Bold and the Beautiful (B&B) spoilers for Thursday, October 11, tease that Steffy (Jacqueline MacInnes Wood) will reel over the steamy moment she witnessed. She just spotted Bill (Don Diamont) kissing Brooke (Katherine Kelly Lang), so she’ll have quite a secret on her hands. Of course, it won’t stay a secret for long.

Steffy will mull over her discovery briefly, but she’ll ultimately decide her dad deserves the truth. It’s what Steffy would want if she were in his shoes. B&B fans can expect Steffy to track Ridge (Thorsten Kaye) down ASAP. She won’t want to drop this betrayal bomb on him, but she’ll feel like she has no choice.

Ridge’s world will crumble on Friday, but Thursday’s episode might kick off the confession. That’d be a good cliffhanger to set up the end-of-the-week action. Regardless, more trouble’s brewing in Ridge and Brooke’s marriage. The Bold and the Beautiful spoilers say a serious confrontation’s coming up next week.

In the meantime, Katie (Heather Tom) will learn a different secret. Brooke will provide updates on Ridge’s dirty move and how it affected the custody case outcome. She’ll insist that Ridge used this as a chance to get revenge. Katie will realize Judge McMullen (Joe Lando) was pressured into ruling against Bill. She’ll be disgusted by Ridge’s behavior and wonder how she should tackle this mess.

Brooke will contend that Katie should do nothing at all. She’ll swear her sister to secrecy, which will put Katie in a tight spot. Now Katie will have to live with setting all this in motion. She’ll hate that she didn’t win the battle fair and square, especially since Bill’s trying so hard to be a better father.

Next week, The Bold and the Beautiful spoilers say Katie will play nice. She’ll be extra generous to Bill, so she may throw in some unscheduled visits and make him a happy papa. Will Bill get suspicious or just enjoy Katie’s seemingly kind gesture? Either way, the truth will cause total mayhem down the road.

It sounds like B&B has some great scenes in store. We’ll keep you posted as other news comes in. Stay tuned to the CBS soap and don’t forget to check CDL often for the latest Bold and the Beautiful spoilers, updates and news.