The Bold and the Beautiful Spoilers: Thursday, October 4 – Emma Gets a Warning About Her Past – Wyatt Falls Harder for Sally 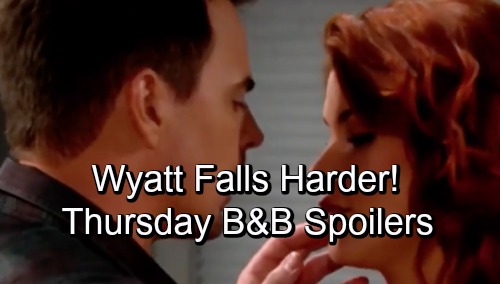 The Bold and the Beautiful (B&B) spoilers for Thursday, October 4, tease that Wyatt (Darin Brooks) will love Sally’s (Courtney Hope) latest surprise. Her designs were a hit at the photoshoot, so she feels like celebrating. Sally just appeared to Wyatt in lingerie, which means they’ll heat things up soon enough.

Wyatt and Sally will put some spice in their romance as they grow closer. They seem to be in a good place right now. Both Sally and Wyatt have been burned before, so they’re taking their time and focusing on what’s right in front of them. They’re not rushing into marriage like everyone else, but they certainly won’t mind seeing where this is headed.

Other Bold and the Beautiful spoilers say Emma (Sia Nioux) will need some support. Thankfully, her bestie will pay her a visit at Forrester Creations. Maile Brady, the daughter of Let’s Make a Deal’s Wayne Brady, will debut in the role of Tiffany. She’s got a close bond with Emma, so she’ll be able to help her pal out.

Emma will confess that her jealousy’s out of control. Of course, she’ll think she has every right to be envious after that photoshoot. Emma won’t approve of Zoe (Kiara Barnes) and Xander’s (Adain Bradley) steamy moments. B&B fans can expect Tiffany to offer some comfort as well as some tough love. She’ll warn that Emma might be letting her past get in the way of her future.

Tiffany will mention that Emma’s battled similar issues before. It sounds like she’s your classic clingy girlfriend who tends to get possessive. Tiffany will argue that Emma’s own insecurities could be the real problem, so she’ll appreciate the honesty. Emma might decide to apologize and give Xander the benefit of the doubt.

Unfortunately, that’s probably the worst possible thing Emma could do. If she lets her guard down, she’ll just give Zoe another chance to work her magic. The Bold and the Beautiful spoilers say Zoe will step up her game before long. She can’t rest until Xander’s her man again, so Emma’s got some serious competition.

It sounds like B&B has some shocking scenes in the works. We’ll give you updates as other news comes in. Stay tuned to the CBS soap and don’t forget to check CDL often for the latest Bold and the Beautiful spoilers, updates, and news.