The Bold and the Beautiful Spoilers: Thursday, September 27 – Bill and Katie’s Cutthroat Arguments – Bill Dragged Through The Mud 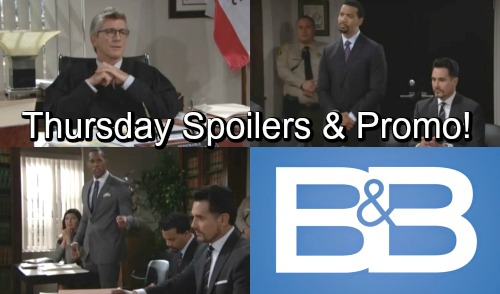 The Bold and the Beautiful (B&B) spoilers for Thursday, September 27, tease that Bill (Don Diamont) and Katie (Heather Tom) will finally face off. They’ll have top-notch attorneys in their corners as they battle it out over custody. Bill just wants to play a substantial role in Will’s (Finnegan George) life. Katie has other plans, so she could easily destroy Bill’s shot at a relationship with his son.

Judge McMullen (Joe Lando) will listen to both sides in Thursday’s new B&B episode, September 27. Carter (Lawrence Saint-Victor) will do his best to swing things in Katie’s favor. He’ll contend that Bill has spent most of the last year ignoring Will. Carter will point out that Bill missed plenty of visits and showed no real interest in the boy. Bill failed to meet his joint custody obligations, so Carter will push for changes.

Next, it’ll be Justin’s turn to speak up. He may admit Bill hasn’t exactly been a father of the year candidate. Nevertheless, this determined dad wants to do better. Shouldn’t Bill get that chance? That’s what Justin will argue as Judge McMullen weighs his options. Justin won’t think the solution is to strip Will’s father from him. He’ll suggest that would cause serious damage and pain for the kid.

B&B spoilers say Bill’s shady past will also come into play. Carter will definitely bring up all the drama Bill’s caused. He’ll try to make Bill look like a rotten person who doesn’t deserve a proper place in Will’s life. Bill’s indeed a scoundrel on any given day, but he truly loves his son. He’ll count on Brooke (Katherine Kelly Lang) and Wyatt (Darin Brooks) to make the judge understand that.

Of course, these witnesses will deal with some nerves. Wyatt and Brooke both care about Katie, but they have to stand up for what they believe in. Still, The Bold and the Beautiful spoilers say they’ll fear Katie’s going to explode. If their words cost Katie the case, they’d certainly face her wrath.

Wyatt may face some tricky questions about his relationship with Katie. He was nearly Will’s stepdad, which could raise a few red flags. Bill also cheated on Katie with Brooke, so that’s another issue that could come up. The Bold and the Beautiful spoilers say this case will definitely get messy!

It sounds like the excitement’s about to rev up. We’ll give you updates as other B&B news comes in. Stay tuned to the CBS soap and don’t forget to check CDL often for the latest Bold and the Beautiful spoilers, updates, and news.