The Bold and the Beautiful Spoilers: Torn Liam Confides in Wyatt – Loves Steffy, But Baby Revs Up Strong Feelings for Hope 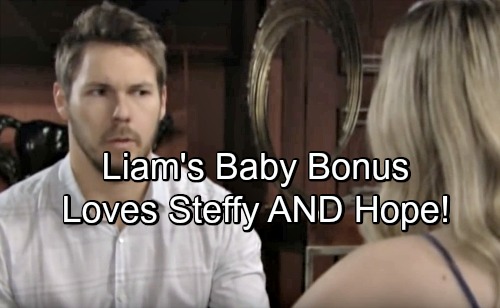 The Bold and the Beautiful (B&B) spoilers tease that Liam (Scott Clifton) will feel like he’s drowning in baby drama. Thanks to Hope’s (Annika Noelle) Fourth of July confession, Liam’s life will never be the same. He’ll find himself facing mixed emotions as he tries to navigate his new mess.

Liam was all set to live happily ever after with Steffy (Jacqueline MacInnes Wood) and Kelly, but he’ll have to envision a different future. It can’t just be the three of them anymore. Hope’s bringing another little one into the picture, so Liam will have to take that into consideration.

Naturally, Liam may have second thoughts about his decision. He loves Steffy, but would he have chosen her without their daughter to bring them closer? If Liam had known about Hope’s pregnancy sooner, he probably would’ve taken more time to weigh his options. Liam might’ve even stood by his commitment to Hope.

However, there’s no point in dwelling on what might’ve been. Liam has to face the reality of the here and now. He’s currently committed to Steffy and has made plenty of promises about their family’s future. Liam also cares deeply for Hope and will want to be a very involved father. He’ll continue to be torn between two women and there’s just no way around that.

Steffy recently pushed for a wedding delay, but she’s changed her mind now that Bill’s (Don Diamont) dropped his blackmail. Unfortunately, it could be Liam’s turn to drag his feet. He’ll remain overwhelmed for a while, so it’d probably be best not to rush into anything.

Liam isn’t known for his romantic patience, but maybe he’ll wise up and realize he can’t keep planning marriage after marriage. He needs to chill out on all the weddings and take some time to assess the situation. Whatever the case, The Bold and the Beautiful spoilers say Liam will need some advice soon. He’ll use Wyatt (Darin Brooks) as a sympathetic and hopefully helpful ear.

After Liam and Steffy fight over the pregnancy news, he’ll open up to Wyatt about his troubles. B&B fans can expect Wyatt to be surprised, but supportive. He’ll feel confident that things are going to work out for Liam one way or another.

Liam will be a great dad to both kids, so that’s not the issue here. He just has to decide which woman his heart belongs to. The Bold and the Beautiful spoilers say Liam will waffle on that choice as usual, so this love triangle will really heat up. We’ll give you updates as other details emerge. Stick with B&B and don’t forget to check CDL often for the latest Bold and the Beautiful spoilers, updates, and news.