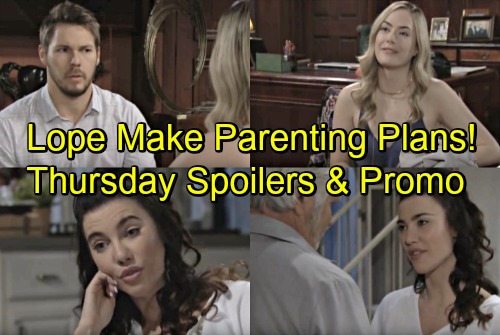 The Bold and the Beautiful (B&B) spoilers for Thursday, July 5, tease that Hope (Annika Noelle) and Liam (Scott Clifton) will have a lot to discuss. Since Hope just revealed her pregnancy, Liam will realize this is going to shake things up with Steffy (Jacqueline MacInnes Wood). He’ll know it’s time to talk about where they stand and how they’re going to handle it.

Hope will smile as she makes an admission about the baby. She’ll suggest that she’s already in love with this little instant life. Hope will undoubtedly acknowledge the poor timing and consequences for Liam, but she won’t conceal her own excitement. She intends to have this child, so she might as well look on the bright side.

Of course, Liam will still be pretty overwhelmed. Hope will sense that he’s disappointed by the news, so she’ll give him a get-out-of-fatherhood-free card. She’ll understand if Liam doesn’t want to be a doting dad in this case.

If Liam wants to be in the kid’s life, Hope would be thrilled to raise him or her together. However, she’d be OK raising the tot alone. Hope will promise that she can handle this if Liam wants to bow out. Naturally, Liam will refuse to walk away from Hope and the baby. It wouldn’t be fair since he’s so devoted to Steffy and Kelly.

Liam will assure Hope that he doesn’t blame her for this pregnancy. He knows it takes two to tango, so they’re a team now. They both made this baby and they should both take responsibility. Meanwhile, B&B spoilers say Quinn (Rena Sofer) and Eric (John McCook) will stop by to see Steffy. They’ll likely marvel at Kelly and ask what’s next for “Steam.”

Steffy will point out that wants to remarry Liam soon. She’ll tell Eric that they finally have everything they’ve ever wanted. Steffy will feel like this marriage will give Hope closure and allow her to move on. Unfortunately, Steffy’s not in the loop on the latest baby developments! The Bold and the Beautiful spoilers say she’ll get an awful shock by the end of the week.

In the meantime, Brooke (Katherine Kelly Lang) and Ridge (Thorsten Kaye) will feud over Liam’s future. They’ll fight for their daughters and their grandchildren, so expect some serious tension. We’ll give you updates as other Bold and the Beautiful details emerge. Stay tuned to B&B and don’t forget to check CDL often for the latest Bold and the Beautiful spoilers, updates, and news.