The Bold and the Beautiful Spoilers: Jacqueline MacInnes Wood Teases Bill and Steffy Reunite – Couple Not Over 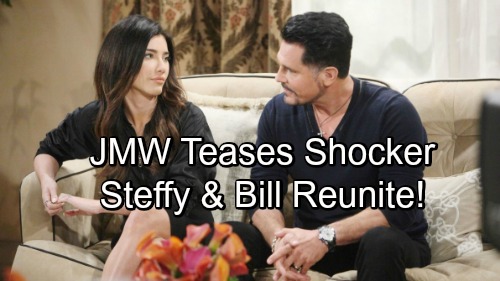 The Bold and the Beautiful (B&B) spoilers tease that things could be shifting in Bill’s (Don Diamont) favor. Now that Hope’s (Annika Noelle) pregnant, that’s certainly going to complicate Liam’s (Scott Clifton) relationship with Steffy (Jacqueline MacInnes Wood). This baby will be a serious obstacle for “Steam,” so B&B fans should be prepared for major drama.

However, that’s not the only story adjustment we’re seeing right now. Bill’s softer side is suddenly shining through and that should be important moving forward. During a recent chat with Steffy, Bill agreed to stay silent about Taylor’s (Hunter Tylo) actions. He intends to keep the secret and protect Steffy’s mom from jail time, so at least he’s not being selfish for once. Forgoing blackmail is a nice start!

Bill also pried a crucial admission out of Steffy. He just felt like he needed to hear that their night meant something. After some prodding, Steffy suggested that she wouldn’t have given herself to a man she had no feelings for. That definitely leaves the door open for “Still” to make a comeback. The Bold and the Beautiful could be headed in this romantic direction.

Jacqueline MacInnes Wood offered her thoughts on the situation in an interview with Michael Fairman. She admitted that the fan wars have been intense, but some new developments could change the game. Wood clearly doesn’t rule out Bill and Steffy’s potential future together.

“It’s pretty wild, and the fights have gotten pretty revved up online,” Wood said. “I feel like right now, Steam fans have been fighting for this.” Wood went on to say that the “Still” support died down due to Bill’s cruel behavior. Since B&B’s backing off the creepy stalker angle, Bill just might turn this ship around.

Wood teased, “So that’s why Steam may have recently been ahead, but it does go back and forth, however, with the storyline coming up there is a possibility that Still may take over again.” There you have it! Wood herself thinks Bill and Steffy have still have a shot at happiness.

Is that a good thing or a bad thing? It all depends on your perspective. Bill has been a monster at times, but at least he’s not hung up on Hope. Then again, it’d be a shame to see “Steam” fizzle. Whatever happens, B&B viewers are sure to have some strong opinions!