BY Marcy Cohen on July 4, 2018 | Comments: one comment
Related : Soap Opera, Spoiler, Television, The Bold and the Beautiful 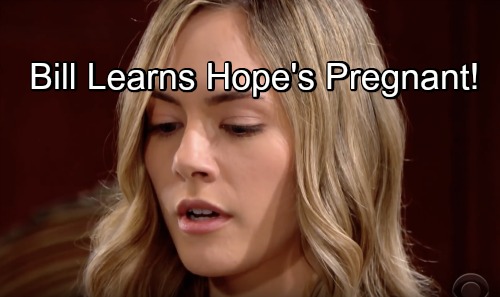 The Bold and the Beautiful (B&B) spoilers tease that Hope’s (Annika Noelle) pregnancy shocker will make some serious waves. Naturally, this is going to shake things up for Liam (Scott Clifton) and Steffy (Jacqueline MacInnes Wood). Ridge (Thorsten Kaye) and Brooke (Katherine Kelly Lang) will face plenty of drama thanks to this baby, too.

However, there’s one person who stands to gain a lot from this kid. He’ll see Hope’s pregnancy as the answer to all his problems. Of course, we’re talking about scheming “Dollar Bill” Spencer (Don Diamont)! B&B fans know that Bill’s decided to set Steffy free, but he doesn’t have all the facts. You can bet Bill will change his mind once Hope’s news spreads.

By the end of this week, July 6, both Liam and Steffy will be in the loop. Word travels fast on The Bold and the Beautiful, so Bill will get updates during the week of July 9-13. He’ll be stunned by this sudden twist of fate. Bill will undoubtedly take it as another sign that he’s meant to be with Steffy. He’ll feel like the universe is pulling Hope and Liam together, so this could really change the game.

Once Bill has this glimmer of hope, he’ll most likely rev up his efforts to win Steffy over. Bill’s scheming could return in a big way. There’ll be a lot at stake, so he may hold nothing back this time around. Bill will want to do everything he can to make sure Liam sticks with “baby mama” number two.

How will Bill plan to achieve his goal? There are several strategies he could use. For starters, Bill could prey on Steffy’s insecurity and vulnerability. After all, that tactic’s worked for Bill in the past. It’s the reason Steffy’s in this whole mess! If Bill had left her alone after all the Liam and Sally (Courtney Hope) kiss chaos, it wouldn’t have set off such a terrible chain reaction.

Bill could also use the threat at Forrester to his advantage. He might hear that Hope’s being targeted and stage a scene where she needs to be rescued. Bill could piggyback on someone else’s plot and try to make a “Lope” reunion happen.