BY Heather Hughes on July 3, 2018 | Comments: one comment
Related : Soap Opera, Spoiler, Television, The Bold and the Beautiful 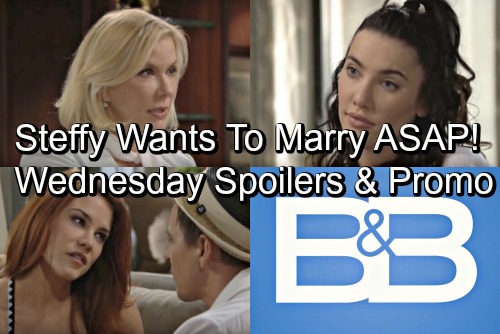 The Bold and the Beautiful (B&B) spoilers for Wednesday, July 4, tease that Brooke (Katherine Kelly Lang) will give Hope (Annika Noelle) some good advice. She’ll insist that Hope needs to fill Liam (Scott Clifton) in on her pregnancy soon. The longer Hope waits, the more complicated things could become on Liam’s end. If she wants her chance at a reunion with Liam, Hope needs to take action ASAP.

Even if Liam chooses Steffy (Jacqueline MacInnes Wood), there’s no point in dragging this revelation out. Hope’s pregnant and that’s that. She might as well give Liam the news and let him deal with it. Soap pregnancies tend to be shorter than real-life pregnancies, so Liam could use extra time to prepare for the birth – if Hope makes it that far.

For now, Hope will have to gather up her courage. She’ll struggle to find the right moment for this crazy conversation. Hope won’t be sure what to say either, so she’ll really face a tough task. B&B spoilers say Hope will have to bail on this chat a couple times. Between growing fears and persistent interruptions, Hope will wonder if she’s ever going to get her shot.

Later, Hope will decide to bite the bullet. She can’t keep putting this off when there’s so much at stake. Besides, there’s no point in waiting for the perfect circumstances. Things are far from perfect and nothing will change that! During a beautiful fireworks display, Hope will suddenly blurt out the bombshell. She’ll confess that she’s pregnant, so Liam will get the shock of his life.

Meanwhile, Steffy will remain oblivious to her rival’s advantage. Thanks to Bill’s (Don Diamont) decision to back off, Steffy will feel like everything’s going her way. She’ll tell Ridge (Thorsten Kaye) she’s ready to marry Liam as soon as possible. Ridge will be glad to hear it, but they’ll both end up disappointed before long. Hope’s pregnancy will bring big changes and they’ll all just have to adjust.

Finally, The Bold and the Beautiful spoilers say Wyatt (Darin Brooks) will reassure Sally (Courtney Hope). They’ll continue to bond as they decorate for Independence Day, but Sally will have Hope on her mind. She won’t want to let Hope’s negative opinion ruin her Forrester opportunity.

Wyatt will give Sally another pep talk and promise that she’s got this. He’ll believe Sally’s going to have a bright future at the company, so let’s hope he’s right. We’ll give you updates as other Bold and the Beautiful details emerge. Stay tuned to B&B and don’t forget to check CDL often for the latest Bold and the Beautiful spoilers, updates, and news.