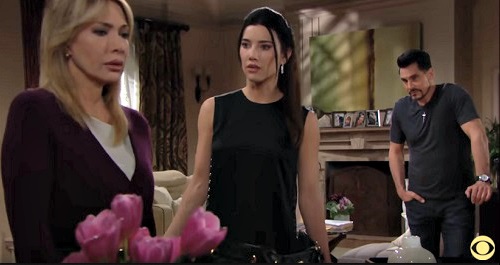 The Bold and the Beautiful (B&B) spoilers for Tuesday, April 18, tease that Steffy (Jacqueline MacInnes Wood) will be in shock over her mother’s actions. Bill (Don Diamont) just snarled that Taylor (Hunter Tylo) was the one who shot him, so Steffy’s going to want more info. She’ll urge Bill and Taylor to explain exactly what went down.

Bill will rant that Taylor pumped a bullet in his back that night and just showed up threatening to shoot him again. He’ll be furious, but Steffy will do her best to calm him down. She’ll eventually turn her attention to Taylor, who will be a real mess.

Steffy will gently touch Taylor’s arm as she asks for her version of events. The Bold and the Beautiful spoilers say Taylor will tear up as she describes seeing the gun at Bill’s place. She’ll suggest that she just lost it. Taylor will express remorse for crossing the line, so Steffy may try to fix this. She surely won’t want her own mom to do prison time for this. 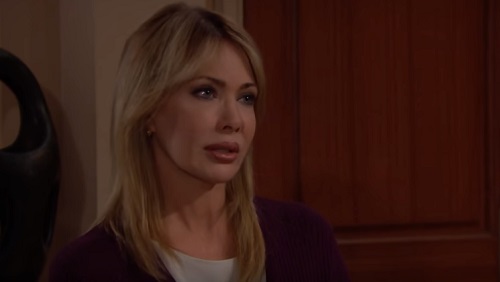 B&B fans can expect Steffy to ask Bill for favor. She may wonder if he’d be willing to let Taylor slide. Since Bill’s so smitten, he might actually go for that idea. However, Bill may be more reluctant to cave in on Steffy’s other request. She’ll also want Bill to back off and just let her reunion with Liam (Scott Clifton) happen. Steffy’s making major progress, so she doesn’t want Bill screwing it up again.

Bill will agree for now, but it won’t be long until he’s stirring up more trouble. Meanwhile, Liam will have some big news for Hope (Annika Noelle). She won’t be pleased about his confession to Steffy, but Liam will think it was necessary. He’ll argue that Steffy is still his wife and she’s carrying his child. Liam will feel like Steffy deserved to know what he’s capable of.

Hope will assure Liam that he’s not dangerous and shift gears to his love life. She’ll contend that Liam needs to part ways with Steffy for good. Hope will be tired of dancing around the issue and making suggestions. She’ll insist that if Liam reunites with Steffy, he’s just going to screw up his life again. Hope will argue that it’ll be on him if it all blows up.

The Bold and the Beautiful spoilers say Liam will catch Hope off guard when he pushes for space. He’ll believe it’ll help him work through his feelings, but Hope will worry that he’s making terrible mistake. We’ll give you updates as other B&B details emerge. Stick with the CBS soap and don’t forget to check CDL often for the latest Bold and the Beautiful spoilers, updates and news.

Steffy was NOT expecting to hear that. #BoldandBeautiful pic.twitter.com/Ssaqs4BNjb