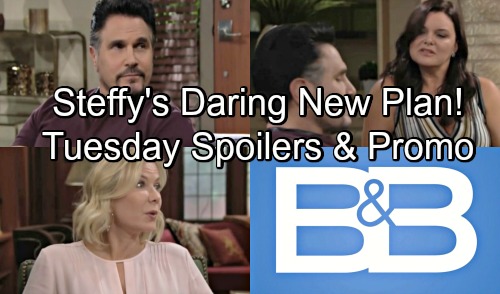 The Bold and the Beautiful (B&B) spoilers for Tuesday, August 14, tease that Bill (Don Diamont) and Katie (Heather Tom) will face conflict. They’ll stir up plenty of old issues and emotions during this conversation. Katie will point out that while Bill’s been chasing after Steffy (Jacqueline MacInnes Wood), he’s been completely ignoring Will (Finnegan George).

Bill may admit that he hasn’t been around much, but he’ll probably downplay the problem. Nevertheless, Katie will insist that changes have to be made. It’s time for Bill to reconnect with his son. Will would certainly love to spend some time with his dad and have his undivided attention for once.

As for Bill’s other son, there isn’t much hope right now. Liam (Scott Clifton) is still hurt and angry over his father’s actions, so Bill will just have to deal with that. He’ll hate that he made such a mess, but Katie will think it serves him right. She’ll wonder how Bill really saw all of this going. You don’t go after your son’s wife and not expect some fallout!

This will likely lead to a deeper discussion about Bill’s previous mistakes. He was convinced that Brooke (Katherine Kelly Lang) was “the one,” which led to the end of his marriage to Katie. Steffy became Bill’s obsession next, so Katie may think this is a pattern. Bill seems to get fixated on a woman and drive her away with all his ruthless schemes.

The Bold and the Beautiful spoilers say their tense chat will eventually turn into a full-blown confrontation. Thorne (Ingo Rademacher) will get on this battle later, so stay tuned for some major relationship drama. Meanwhile, Steffy will have another B&B announcement to make. She’ll share an intriguing business plan at Forrester Creations, so the team should be excited about what’s ahead.

Brooke will definitely be glad that FC is controlled by the right family. She’ll be relieved that they’re finally free of Bill and can forge their own path. Of course, there are bound to be some problems soon. Things have been going well since Steffy started showing off her power, but how long will the peace last?

Steffy could easily get a little too daring or perhaps get on Hope’s bad side as resentment grows. She’ll try to stay positive for now, but B&B fans should brace for drama sooner or later. We’ll give you updates as other Bold and the Beautiful news comes in. Stick with the CBS soap and don’t forget to check CDL often for the latest Bold and the Beautiful spoilers, updates, and news.