The Bold and the Beautiful Spoilers: Tuesday, December 18 – Liam Responds To Jealous Hope – Bill Refuses To Do Brooke’s Bidding

BY hellodrdavis on December 17, 2018 | Comments: one comment
Related : Soap Opera, Spoiler, Television, The Bold and the Beautiful 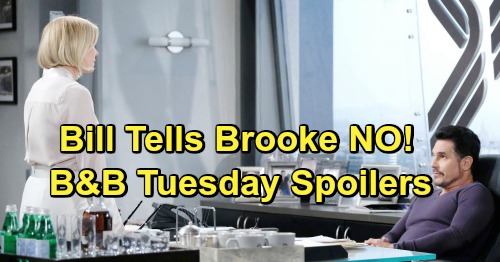 The Bold and the Beautiful spoilers for Tuesday, December 18, tease that the argument between Hope (Annika Noelle), Steffy (Jacqueline MacInnes Wood), and Liam (Scott Clifton) will continue barreling forward. These three can’t get on the same page about whether Taylor (Hunter Tylo) should be a part of their children’s lives.

After Liam said his piece and suggested that perhaps Hope was reacting out of fear and that a compromise was the best solution, Hope freaked and began to wonder aloud whether Liam regretted his decision to marry her and would rather be a family with Steffy and Kelly (Zoe Pennington).

On Tuesday’s B&B episode, December 18, Liam will get to respond to his wife’s questions and try to diffuse the situation. 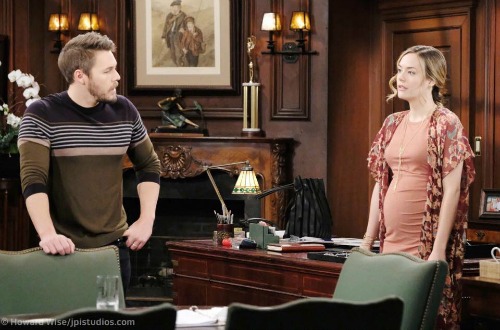 But it probably won’t be easy, nor successful, for him. B&B spoilers say that Hope will soon give Liam an ultimatum about the holidays, and this likely means that Hope will declare all situations and events “no Taylor” zones. Hope doesn’t want Taylor to be anywhere near her unborn daughter, and that’s likely not going to change anytime soon.

Meanwhile, on Tuesday, Bill (Don Diamont) and Brooke (Katherine Kelly Lang) will continue their conversation about Taylor at Bill’s office. Bill has just figured out Brooke’s end game; she wants Bill to go to the police about Taylor and permanently neutralize her as a threat to everyone.

But it seems that Bill will stick firm to his decision to stay quiet about Taylor being the shooter. Bill made a promise to Steffy that he wouldn’t turn Taylor in, and he plans to keep his promise. Brooke just won’t understand Bill’s choice and she’ll probably again appeal to his protective grandpa side by arguing that Taylor poses a huge threat to Kelly.

It doesn’t look like any of Brooke’s appeals will work on Bill, which will leave her frustrated. Bill will probably make the situation worse by pointing out his true motivation for becoming a “better man” and forgoing vengeance on Taylor.

Of course, Brooke herself is the reason why Bill has turned over this new leaf and isn’t going to try to get even or meddle in Steffy and Liam’s affairs any longer.