The Bold and the Beautiful Spoilers: Tuesday, May 29 – Hope and Liam Postpone – Thorne Hits On Katie – Justin’s Move Stuns Bill

BY Heather Hughes on May 28, 2018 | Comments: one comment
Related : Soap Opera, Spoiler, Television, The Bold and the Beautiful 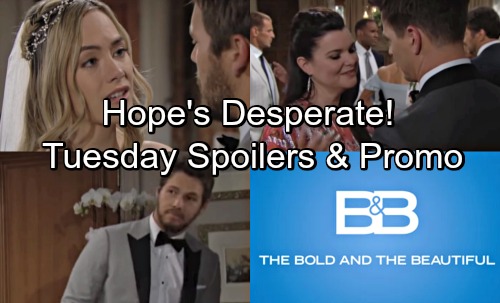 The Bold and the Beautiful (B&B) spoilers for Tuesday, May 29, tease that Hope (Annika Noelle) and Liam (Scott Clifton) will have a heart-to-heart about their future. Liam just admitted that Bill (Don Diamont) staged an affair to manipulate Wyatt (Darin Brooks). Hope now realizes Liam’s decision was based on a lie, so that’s something they’ll have to address. This is a huge deal for their relationship.

Liam will note that Bill wanted to destroy his marriage so he could have Steffy (Jacqueline MacInnes Wood) for himself. Once Liam’s done explaining, Hope will be completely appalled by Bill’s actions. Thanks to his father’s latest round of deception, Liam had to endure more suffering. Hope will hate that Liam was pushed her way instead of choosing her for himself.

B&B fans can expect some emotional moments for these almost newlyweds. Hope will assure Liam that she loves him and wants to be with him. However, this isn’t the dream wedding Hope had in mind. She doesn’t want to feel like she inadvertently trapped Liam in his marriage.

The Bold and the Beautiful spoilers say Hope and Liam will decide to postpone their nuptials. They just can’t go through with this right now. Liam needs a chance to speak with Steffy and work through his feelings. It’s only fair since Steffy’s been making an honest effort to fight for her family.

Hope will suggest that if Liam still wants to marry her at the end of all this, her answer’s still yes. She can be patient and let Liam do what he needs to do. Meanwhile, Katie (Heather Tom) will begin to see Thorne (Ingo Rademacher) in a new light. She’ll be a bit drawn to him as they flirt. Thorne certainly hasn’t forgotten about his attraction to Katie, so expect him to keep pursuing her this summer.

Finally, Justin (Aaron D. Spears) will catch Bill off guard. When Bill orders his right-hand man make another manipulative move, Justin won’t stand for it. He’ll tell a stunned Bill that he wants out of this mess. Justin has always been loyal in the past, but enough is enough. He just can’t play a role in all the heartbreak anymore.

Of course, Justin’s disloyalty doesn’t really matter at this point. The jig is up for Bill, so he’ll face plenty of backlash later this week. We’ll give you updates as other Bold and the Beautiful news comes in. Stay tuned to B&B and don’t forget to check CDL often for the latest Bold and the Beautiful spoilers, updates, and news.