The Bold and the Beautiful Spoilers: Tuesday, May 8 – Steffy Begs for Wyatt’s Help – Justin Warns Bill of Disastrous Fallout

BY Marcy Cohen on May 7, 2018 | Comments: one comment
Related : Soap Opera, Spoiler, Television, The Bold and the Beautiful 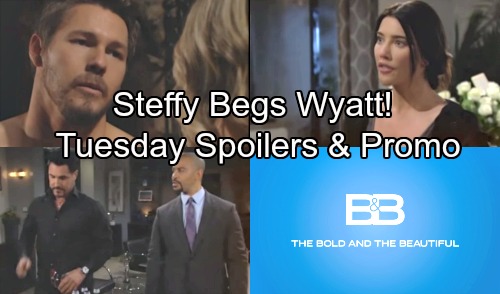 The Bold and the Beautiful (B&B) spoilers for Tuesday, May 8, tease that Justin (Aaron D. Spears) will offer Bill (Don Diamont) a warning. He hasn’t had any luck convincing Bill that his sneaky plan was wrong. With that in mind, Justin will try another angle. He’ll point out that this plot could easily blow up in Bill’s face.

Of course, B&B spoilers say Bill won’t be worried. He thinks he’s got everything under control and even if he doesn’t, he’s survived worse. Bill will note that he nearly died from a bullet to the back. He won’t think his scheme poses any real threat, but he could be wrong about that. No one can predict what the aftermath of all this will bring! Things could once again get dangerous if Bill’s not careful.

Other Bold and the Beautiful spoilers say Steffy (Jacqueline MacInnes Wood) will seek Wyatt’s (Darin Brooks) help. She’ll ask him to come over and hear her desperate plea. Steffy will maintain that she has no clue what Liam’s talking about. He believes her romance with Bill is still going on, but she’ll assure Wyatt that’s not the case.

Steffy will hope that Wyatt can talk some sense into his brother. She’ll want Liam to understand that she shared one night with Bill and that was it. Wyatt will be baffled by Steffy’s insistence. He’ll wonder if she’s telling the truth or if this just some bizarre ploy. Steffy will do her best to convince Wyatt of her honesty, but he may need a bit more time to mull this over.

Over with Liam and Hope (Annika Noelle), they’ll bask in the afterglow of their steamy reunion. In bed, Liam will promise Hope that he’s never letting her go again. When they revisit the topic of their engagement, Hope will suddenly have an idea. She’ll leave the room to retrieve a memento that’s sure to surprise Liam.

Hope will pull out her old engagement ring and suggest that it’s a perfect choice. Liam will place it on Hope’s finger, so she’ll have some bling to show off later this week. We’ll give you updates as other Bold and the Beautiful news comes in. Stick with B&B and don’t forget to check CDL often for the latest Bold and the Beautiful spoilers, updates, and news.