The Bold and the Beautiful Spoilers: Tuesday, October 16 – Wyatt Delivers Big Blow to Bill – Ridge Decides Fate of His Marriage

BY Heather Hughes on October 15, 2018 | Comments: one comment
Related : Soap Opera, Spoiler, Television, The Bold and the Beautiful 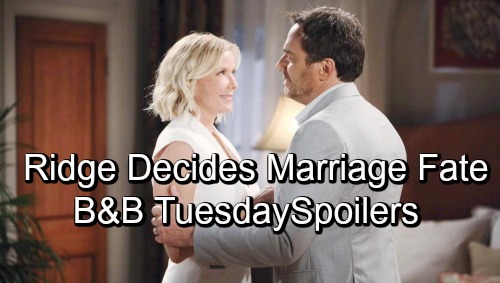 The Bold and the Beautiful (B&B) spoilers for Tuesday, October 16, tease that Ridge (Thorsten Kaye) will wrestle with his feelings. He’s furious with Brooke (Katherine Kelly Lang) for growing closer to Bill (Don Diamont) and letting him kiss her. Brooke assured Ridge that she put a stop to it, but that’s just not good enough. Since it happened more than once, Ridge has major concerns.

Nevertheless, Brooke will promise that she wants Ridge and only Ridge. She’ll push him to accept her apology and find a way to let this go. Brooke will understand that she hurt Ridge deeply, but that was never her intention. She was just trying to help a hurting father keep rights to his son. Bill’s relationship with Will (Finnegan George) was at stake, so Brooke had to do something to help.

Of course, that part of all this irks Ridge as well. He was fighting just as hard to keep Bill and Will apart. Still, Ridge kept secrets from Brooke and committed a crime. Perhaps he’ll take that into consideration as he decides the fate of his marriage.

B&B fans will see some desperate begging from Brooke on Tuesday. She’ll hope it’s not too late to save their relationship. The Bold and the Beautiful spoilers say Ridge will soften slightly and agree to move forward. However, he certainly won’t forget about what Brooke and Bill did behind his back.

Bill will face Ridge’s fury soon enough, but he’ll deal with a different blow first. Wyatt (Darin Brooks) will drop by Bill’s office and admit he’s got some big news. Unfortunately, Bill won’t like his son’s announcement. Wyatt has accepted a position at Forrester, which means he’ll have to resign at Spencer Publications.

The Bold and the Beautiful spoilers say Bill will view this as a betrayal. He’ll accuse Wyatt of abandoning the family legacy, but he won’t stop what’s in motion. Wyatt will contend that he’s ready for a new adventure. He’ll try to make Bill understand that he has to follow his own path.

Bill still won’t be happy, but he’ll at least tone his anger down a notch. Since there’s been so much drama in the Spencer clan lately, Bill won’t want to rock the boat all over again! We’ll give you updates as other B&B details emerge. Stay tuned to the CBS soap and don’t forget to check CDL often for the latest Bold and the Beautiful spoilers, updates, and news.