BY hellodrdavis on October 30, 2018 | Comments: 2 comments
Related : Soap Opera, Spoiler, Television, The Bold and the Beautiful 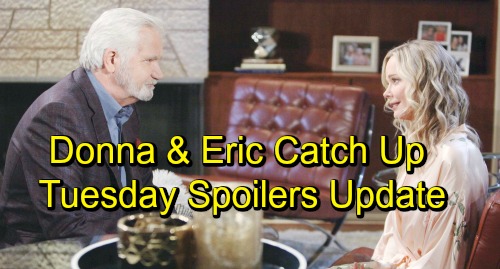 The Bold and the Beautiful spoilers for Tuesday, October 30, tease that Bill (Don Diamont) will embrace his new lease on life, now that he’s awakened from his fall-induced slumber. He’s just asked Brooke (Katherine Kelly Lang) to come back to him, and he’s promised to be a better, more giving man going forward.

Now that Bill’s awake, Detective Sanchez (Jeremy Ray Valdez) will want to talk to him and get his version of what went down on that balcony. Ridge (Thorsten Kaye) will expect Bill to tell Detective Sanchez that he was deliberately pushed, but to Ridge’s surprise, Bill will maintain that the fall was accidental.

But that won’t stop Ridge and Bill from hurling accusations at one another once Detective Sanchez is gone. Rest assured, the animosity between the two men will still be there big time, and Ridge won’t waste any time calling out Bill on going after Brooke.

Meanwhile, on the new B&B episode on Tuesday, October 30, Eric (John McCook) will be speechless as he encounters Donna (Jennifer Gareis) standing in front of him in a sexy number from the new Intimates line. Of course, Donna and Eric used to be married, so this will stir up memories of old times.

Donna was the last person that Eric expected to see at Thorne’s (Ingo Rademacher) place, but she’ll be a welcome distraction from the problems with Quinn (Rena Sofer) he just walked away from at his estate.

Eric and Donna will probably spend some time catching up after Donna gets dressed, and she’ll likely explain that she’s back in town for the long haul. The two will chat and get caught up.