BY Heather Hughes on September 4, 2018 | Comments: one comment
Related : Soap Opera, Spoiler, Television, The Bold and the Beautiful 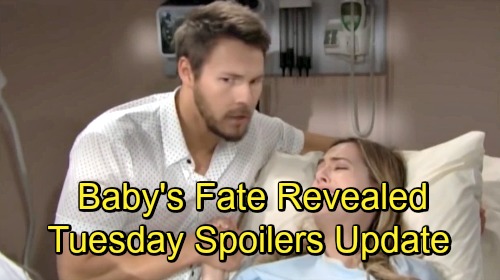 The Bold and the Beautiful (B&B) spoilers for Tuesday, September 4, tease that Hope (Annika Noelle) will panic over her baby crisis. As Dr. Phillips (Robin Givens) keeps searching for the heartbeat, Hope will break down in tears. She’ll ask why they aren’t hearing it as Liam (Scott Clifton) desperately tries to soothe her.

Liam will be just as worried as Hope, but he’ll try to be her rock during this ordeal. Since Hope’s already had one miscarriage, Liam will be terrified about her having another. He’ll realize that would crush Hope to the core. Of course, Liam’s already excited about having a second son or daughter as well. It would devastate him to learn Hope suddenly lost the baby.

Nevertheless, Liam will urge Hope to stay positive and just wait for more info. He’ll want to believe their baby’s still alive and well. Fortunately, there’s a good chance this is a false alarm. B&B spoilers hint that Hope will back to business as usual later this week. She’d probably step away to mourn if she lost her little one, so that’s a great sign.

In the meantime, Steffy (Jacqueline MacInnes Wood) will promote peace at Forrester Creations. She may face questions about her recent “Lope” support, but Steffy will just want everyone to come together. It’s especially important if Hope’s facing a high-risk pregnancy.

However, Hope’s stress levels could go through the roof soon. A Forrester battle’s brewing, so everyone had better buckle up! Steffy will be just as tense when her intimates line and Hope for the Future go up against each other. They’ll both be on the chopping block in the near future, which means hot drama’s ahead.

For now, another battle will remain front and center. As Bill’s (Don Diamont) threats get harsher, Thorne (Ingo Rademacher) will do his best to intervene. He wants to help Katie (Heather Tom) get sole custody of Will (Finnegan George) and make the process as easy as possible.

Bill’s equally determined to win, so he’ll be sure to say so on Tuesday. The Bold and the Beautiful spoilers state that Bill will stand his ground and vow to do whatever it takes. He’ll insist he’s going to fight harder than he has for anything or anyone in his life.