The Bold and the Beautiful Spoilers: Two Weeks Ahead – Quinn Spots Donna and Eric’s Close Moment, Raging Wife Out For Blood

BY Heather Hughes on October 30, 2018 | Comments: one comment
Related : Soap Opera, Spoiler, Television, The Bold and the Beautiful 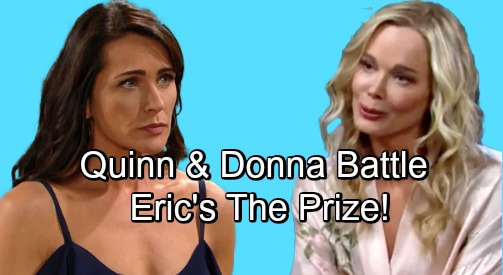 The Bold and the Beautiful (B&B) spoilers tease that Donna (Jennifer Gareis) will pull Eric (John McCook) closer. She’s feeling awfully nostalgic lately and that can only mean bad news for Eric’s marriage. Things are already strained with Quinn (Rena Sofer), so Donna will have an easy advantage.

At first, Donna won’t push too hard. She’ll continue to be a friend to Eric during his rough patch with Quinn. Of course, Donna will be hoping for more in the back of her mind. It probably won’t be long until she kicks off a full-fledged reunion mission.

Eric is a good guy with a loyal heart, so it won’t be easy for him to betray Quinn. However, it could certainly happen if his relationship issues remain. Quinn’s been going ballistic over a wedding that’ll be over within a few hours. Why can’t she just suck it up and let Pam (Alley Mills) have her big day at the Forrester mansion? That’s what Eric will keep asking himself as Quinn’s fight revs up.

Since Eric isn’t backing down either, their problems are only going to get worse. Eric will have to rely on Donna more and more, so their bond will strengthen. It’ll be like no time has passed for these exes. The Bold and the Beautiful spoilers say Donna and Eric will reflect on their past together. They’ll bring up old stories and share tender moments regarding their B&B history.

Unfortunately, Quinn will catch a glimpse of their bonding session on next week’s new B&B episodes, November 5-9. She’ll seethe as she sees a touching exchange between Eric and Donna. Quinn’s not the kind of gal who just sits back in silence. She may not march over to confront the former flames right away, but she’ll certainly lash out soon after.

Quinn may not want to think the worst of Eric just yet, so Donna might be her focus. She could concentrate on warning her rival to back off. Pam and her wedding are clearly the least of Quinn’s worries. Quinn needs to forget all that and figure out how she’s going to keep Donna’s threat at bay.

It sounds like Quinn and Donna will go to war. Donna shouldn’t be underestimated, but she should really fear Quinn’s dark side. Quinn knows how to play dirty, so Donna may be provoking the beast! We’ll give you updates as other Bold and the Beautiful details emerge. Stay tuned to B&B and don’t forget to check CDL often for the latest Bold and the Beautiful spoilers, updates and news.