The Bold and the Beautiful Spoilers: Wayne Brady Debuts as Dr. Buckingham – Zoe’s Father Gets Tangled in Mysteries and Passion

BY Heather Hughes on October 25, 2018 | Comments: one comment
Related : Soap Opera, Spoiler, Television, The Bold and the Beautiful 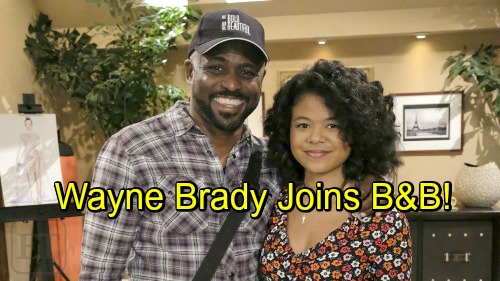 The Bold and the Beautiful (B&B) spoilers reveal that a new cast member is on the way. It’s someone who’s already part of the CBS daytime family, but he’s about to make his B&B debut. Wayne Brady is a popular entertainer who’s known for his hosting duties on Let’s Make a Deal. He’ll keep that gig, but he’s going to stir up some soapy trouble as well.

This new doc will score a job at a Los Angeles hospital, which means he’ll be around to butt in Zoe’s business. According to Entertainment Weekly, Brady’s first episode will air on November 30. He’ll be serving as a series regular, so the show should find several ways to get him involved in the drama.

It sounds like Dr. Buckingham and Zoe will clash thanks to some old issues. They have very different personalities, so that won’t help matters. Dr. Buckingham will be brainy and sophisticated, so he’s probably a no-nonsense kind of guy. Zoe’s more of a free spirit with a manipulative side.

Since the doc is taking a position in LA, there’s a good chance Zoe will be the reason why. Perhaps Dr. Buckingham will want to keep an eye on his mischievous daughter. Regardless, a B&B spokesperson reveals that Dr. Buckingham will quickly find himself “entangled in a web of passion and mystery.”

Does that mean Dr. Buckingham will find love himself or just meddle in other love stories? Will he crack any cases while he’s around? Time will tell, but The Bold and the Beautiful spoilers say he’ll play a significant role in some key plots.

Brady scored the part after chatting with B&B’s head writer and executive producer, Bradley Bell. Since Brady loved the show growing up, he mentioned it during a visit to set. Brady was there to support his real-life daughter’s role as Tiffany, but he ultimately got a role of his own. Bell couldn’t pass up the chance to cast Brady, so Dr. Buckingham plans got underway.

Are you anxious to see what’s in store for Dr. Buckingham? Will he create headaches for Zoe, who’s trying to win back Xander (Adain Bradley)? We’ll give you updates as other Bold and the Beautiful news comes in. Stay tuned to the CBS soap and don’t forget to check CDL often for the latest Bold and the Beautiful spoilers, updates, and news.