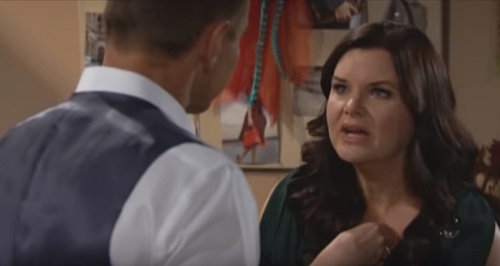 The Bold and the Beautiful (B&B) spoilers for Wednesday, April 11, tease that Bill (Don Diamont) will force Wyatt (Darin Brooks) to make a difficult decision. He’ll insist that if Wyatt plays it smart, one day he’ll inherit the entire company. Bill will encourage Wyatt to back out of his marriage to Katie (Heather Tom). He’ll dangle his future at Spencer Publications in front of him and hope Wyatt caves in.

However, Bill will be prepared for the possibility of resistance. He’ll manage to stay calm this time, but he’ll still deliver some harsh threats. Bill will insist that if Wyatt goes through with the wedding, he’ll be cut out completely. His father has no intention of tolerating Wyatt and Katie’s union, so that’s something the couple will have to accept.

Bill may add that he’ll follow through on his promise to get custody of Will (Zane Achor). He’ll definitely lay down the law in Wednesday’s B&B episode. Bill will want to scare his son into following orders, but we all know Wyatt can be just as stubborn as his dad sometimes. He may decide that love can overcome any obstacles, but will Katie feel the same way? 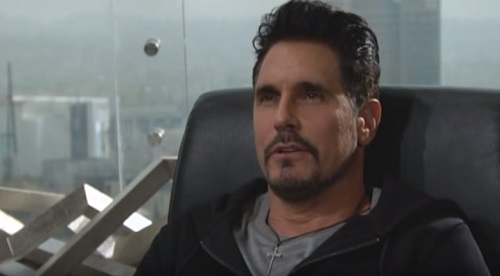 Across town, Katie will rant to Thorne (Ingo Rademacher). She’ll think it’s ridiculous that Bill is putting up such a fierce fight. Katie will argue that Bill shouldn’t be able to dictate who she loves and who she spends her time with. She’ll just want the freedom to be with Wyatt and move forward, but Thorne will point out that may not be an option.

Of course, Thorne won’t hesitate to push himself an alternative again. He’ll raise more doubts about the trouble life with Wyatt will bring. Katie will feel backed into a corner, which means Wyatt could have some heartbreak headed his way. He’ll probably stand his ground with Bill, but Katie might decide marriage is off the table.

Later, The Bold and the Beautiful spoilers say Ridge (Thorsten Kaye) will unleash his wrath. He’ll feel like Bill’s causing additional problems for Steffy (Jacqueline MacInnes Wood), so he’ll want to shut down his enemy’s advances. Ridge will suggest that Bill managed to escape death once, but he may not be so lucky next time!

Brooke (Katherine Kelly Lang) will soon be concerned about Ridge’s persistent anger. She’ll fear that he could land himself back behind bars if he’s not careful. We’ll give you updates as other Bold and the Beautiful news comes in. Stick with B&B and don’t forget to check CDL often for the latest Bold and the Beautiful spoilers, updates and news.

Thorne does have a good point… #BoldandBeautiful pic.twitter.com/iFgpUQLYe4