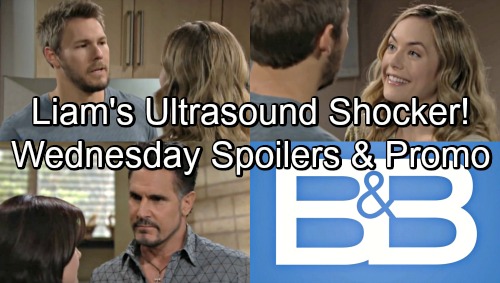 The Bold and the Beautiful (B&B) spoilers for Wednesday, August 29, tease that Bill (Don Diamont) and Katie’s (Heather Tom) war will rage on. Now that Thorne’s (Ingo Rademacher) not around, Bill will try to get through to Katie in peace. He’ll want her to admit that he loves their son, which Katie can’t deny. However, Bill hasn’t done a very good job of showing it lately.

Katie will become more and more convinced that she should take Will (Finnegan George) away from Bill. As Bill’s rage boils over, that’ll just prove Katie’s point. Bill is unreliable and a terrible role model for the boy. His threats will just make Katie see how ruthless her ex can be.

Nevertheless, Bill will be willing to do whatever it takes. He’ll insist that he still has a chance to make things right with Will, so he’s not letting Katie rob him of that. If Katie cuts Bill out of the picture, it could alter the course of Will’s life forever. This could mean the difference between having a real relationship with his dad and treating him like a stranger.

There was a time when Bill was the only parent Will could count on. He’ll remind Katie of that and bring back painful memories of her battle with the bottle. Naturally, Katie will blame Bill for her alcoholism. He was obsessed with Brooke (Katherine Kelly Lang) toward the end of their marriage and that pushed Katie to the edge.

Bill won’t hesitate to bring up Katie’s drunken displays in court. He’ll be happy to use any other past issues against her as well. Bill will reiterate that Katie’s going to regret it if she moves forward with this case. Katie won’t back down, so it seems a fierce custody fight is brewing.

Across town, Liam (Scott Clifton) will join Hope (Annika Noelle) for her ultrasound appointment. Hope will be excited about seeing their little one, but Liam will admit he’s concerned. It looks like his worries will stem from the doctor. Liam knows Dr. Phillips (Robin Givens) because she was Steffy’s (Jacqueline MacInnes Wood) doc, too. He’ll confess that to Hope, so she’ll definitely be uneasy.

Hope wants this pregnancy to be special, not a repeat of Steffy’s. She likes the idea of creating her own family with Liam, but it could be tough if everything feels tied to his ex. The Bold and the Beautiful spoilers say Hope’s fears will intensify soon enough. In Thursday’s B&B episode, Liam will bail on this appointment to help Steffy with Kelly. That should give Hope another reason to fret!