The Bold and the Beautiful Spoilers: Wednesday, July 18 – Brooke Nudges Liam Toward a Future with Hope – Zoe Spills Xander’s Secrets 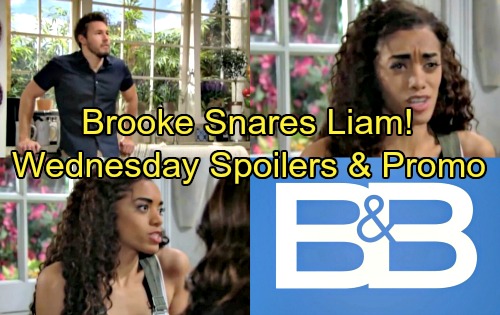 The Bold and the Beautiful (B&B) spoilers for Wednesday, July 18, tease that Zoe (Kiara Barnes) will shut down at least some of the accusations against her. She’ll admit she could be considered a jealous, rejected girlfriend. However, Zoe will find all the stalker talk absurd. She’ll assure Emma (Nia Sioux), Xander (Adain Bradley) and the others that she’s not dangerous.

Regardless, Sally (Courtney Hope) isn’t happy about being set up. Emma certainly didn’t appreciate being targeted either. Once they’re done ranting, Xander will take his turn with Zoe. He’ll insist that they aren’t connected anymore, so there’s no reason for her to be in Los Angeles. Xander will make it clear that they’re never ever getting back together.

Of course, Zoe has no intention of leaving. She hasn’t won Xander over yet, so she won’t pay attention to any warnings she receives. Instead, The Bold and the Beautiful spoilers say Zoe will start spilling secrets. She’ll make things difficult for Xander by sharing details about his old life, so expect some waves in his new one.

Meanwhile, Brooke (Katherine Kelly Lang) will speak with Liam (Scott Clifton) privately. She’ll think it’s high time they had a chat about Hope (Annika Noelle). Brooke will wonder when Liam’s going to stop messing around and just settle down with her daughter. She’ll argue that Hope’s always been a better match for Liam than Steffy (Jacqueline MacInnes Wood).

Brooke will also bring up the baby and how important it is for them to be a family. Liam will undoubtedly mention his other B&B family, which includes Steffy and Kelly. It’s not like he can just walk away from them. Brooke will understand that, but she’ll think Hope and Liam are the ones with a romantic future. She won’t think they should keep fighting fate.

Liam will suggest that it never even occurred to him that Hope could get pregnant. He apparently learned nothing from Steffy’s romp with Bill (Don Diamont) and all the drama that brought. Liam may rehash the chaos and contend that he should’ve been more careful.

At the same time, Liam can’t help but be excited about this little one. It complicates his life, but he’s looking forward to raising a child with Hope. Brooke will believe that’s proof they should be together. She’ll do whatever she can to make Liam see the light, but he just won’t be ready to commit.